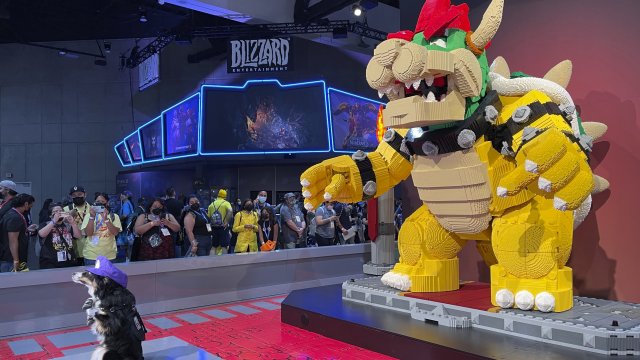 SMS
Lego Celebrates Its 90th Anniversary At San Diego Comic-Con
By Casey Mendoza
By Casey Mendoza
August 10, 2022
The Lego Group started in 1932 with wooden toys and eventually introduced plastic bricks, which still reign over the rest of the toy industry.

This year's San Diego Comic-Con features a 14-foot-tall Bowser from the video game franchise "Super Mario Bros." He's made up of over 700,000 Lego bricks — a symbol of the big celebration happening for Lego's 90th anniversary.

"A lot of people have these long histories with playing with bricks as a kid and then growing up, so I think we just wanted to pay homage to that," said Cassidy Najarian, The Lego Group spokesperson.

The Lego Group started on Aug. 10, 1932, in Denmark with wooden toys. Then eventually the colorful, plastic, interlocking bricks inspired by an existing line of toys from Kiddicraft were introduced.

That means Lego wasn't the first of its kind, but it quickly became the most popular. In 1998, Lego became one of the first toys inducted into the National Toy Hall of Fame, and in 2000, Lego beat the teddy bear and Barbie in winning Toy of the Century by the British Association of Toy Retailers.

Today, Lego continues its reign over the toy industry. The company made $8.4 billion in revenue in 2021, making it the highest-earning toy brand in the world, ahead of Bandai Namco, Hasbro and Mattel — each of which have their own competing brick toys.

It's also one of the most expensive toys on the market, costing parents and families almost double what they would pay for other types of toys like action figures and stuffed animals. In some cases, Lego sets can cost hundreds of dollars.

That's because of another hallmark of Lego's history: licensing.

In 1998, Lego negotiated with Lucasfilm for the exclusive rights to create a line of toys for "Star Wars." Since then, the company has partnered with other major franchises like Marvel and Harry Potter, and even sitcoms like "The Office."

In many of these cases, Lego sets aren't just toys made for kids; they're for collectors.

Over nine decades, Lego has built its brand brick by brick to include more than just toys. The company now commands several video games, films and 10 different theme parks all over the world.