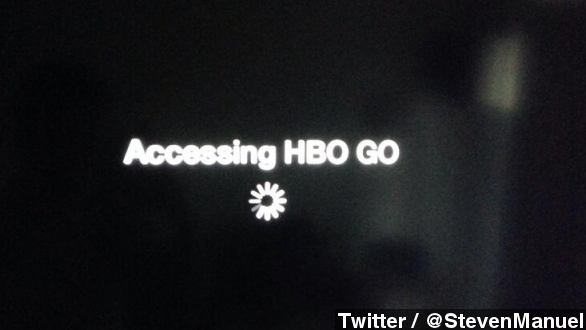 SMS
Legions Of HBO Go 'Moochers' Crash App After 'Thrones' Debut
By Kristian Mundahl
By Kristian Mundahl
April 7, 2014
The Internet was outraged after HBO's streaming app crashed after the "Game of Thrones" premiere. But does everyone have a right to complain?
SHOW TRANSCRIPT

Yet again, HBO's season premiere of "Game of Thrones" featured a few dramatic deaths. But the one that resounded the most? Well, it was the tragic, if temporary, demise of HBO Go.

For the second time in as many months, HBO's companion Web app kicked the bucket Sunday night, stalling out when thousands of Starks and Lannisters logged on to catch the "Thrones" premiere. (Via HBO / "Game of Thrones")

But if you were expecting HBO to be overly apologetic, think again. Many HBO Go users aren't exactly paying the iron price, ducking paid subscriptions and using their girlfriend's dad's boss's dentist's dog's password to tune in.

In response to the outage outrage, HBO's Go account tweeted, "We're sorry for all of the trouble, but if you're an @HBO subscriber, the @GameOfThrones premiere replays at 11 PM EST."

And Gizmodo sarcastically scolded these so-called "moochers": "What they should have done instead? Actually subscribe to HBO. Crazy, I know."

The outage isn't the first one. Early last month, Go infamously cut out right after the season finale of "True Detective" aired, leading Vanity Fair's Richard Lawson to opine: "GO thieves acknowledge that fees are too high, but are happy with someone else paying them as long as they get to watch for free. And then they complain when it doesn’t work??"

The "Thrones" premiere broke its own piracy records Sunday night, with over 1 million unique IP addresses torrenting the episode soon after it was posted online. (Via Excipio)

And the other illegal way? Well, we just talked about it. Turns out sharing your HBO Go password is indeed against the law, classified as a misdemeanor for violating the Computer Fraud and Abuse Act. (Via Forbes)

Now, obviously, nobody's getting cuffed over peer-to-peer passwords, but as The New York Times' public editor wrote last year, it's a "very murky area when the companies themselves don't really seem to see it as a huge problem."