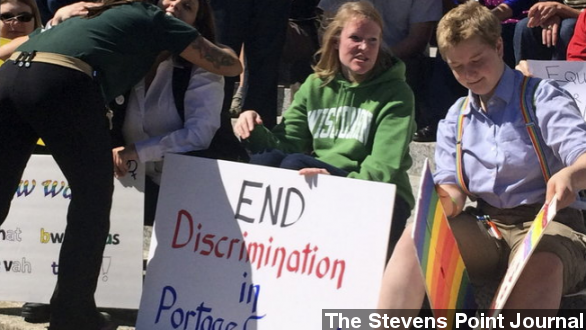 The legal status of same-sex couples married in Wisconsin is now uncertain after a federal judge halted the state's issuing of marriage licenses.

U.S. District Judge Barbara Crabb struck down the state's 2006 prohibition on same-sex marriages last week, but did not stay her ruling at the time — allowing a number of gay weddings to proceed amid the confusion. (Via WDJT)

She's now put a temporary hold on that ruling while an appeal by the state's Republican attorney general is pending, leaving the legal status of more than 550 now-married same-sex couples in limbo. (Via WCCO)

CNN has Crabb's 14-page decision, where she writes: "After seeing the expressions of joy on the faces of so many newly wedded couples featured ... I find it difficult to impose a stay ... [However] A federal district court is required to follow the guidance provided by the Supreme Court."

Crabb is referring to the situation in Utah, where more than 1,000 gay couples married in December and January after its gay marriage ban was struck down last year. However, the marriages stopped after the Supreme Court stepped in and stayed the ruling pending appeals. (Via KTVX, NBC)

Due to the stays in Wisconsin and Utah, it's unclear what rights same-sex married couples have on issues such as state income taxes, pensions, health insurance and more.

Same-sex marriage is legal in 19 states and the District of Columbia. It is believed that the issue of state bans on gay marriage will be taken up by the Supreme Court this fall.