Can Trump Force States To Reopen? Experts Say No 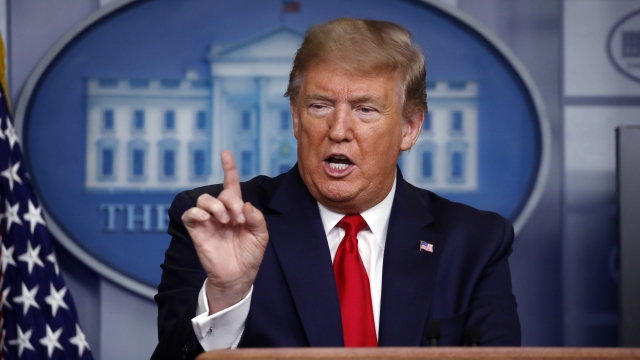 SMS
Can Trump Force States To Reopen? Experts Say No
By Kellan Howell
By Kellan Howell
April 14, 2020
President Trump says he has the "absolute authority" to reopen states that have locked down amid the coronavirus. Some experts say that's not true.
SHOW TRANSCRIPT

President Trump says he wants to begin reopening the American economy by the beginning of next month, and he says he will make states comply if he has to.

"The federal government has absolute power. It has the power. As to whether or not I'll use that power, we'll see," President Trump told reporters at a coronavirus task force briefing on Monday.

But legal experts say, that's not the case.

"So the president has the bully pulpit and he can encourage, he can exhort, he can say companies are open. But it's the governors who have the authority to say whether businesses are open or closed under emergency orders because the emergency orders lie with the governors," said Meryl Chertoff, executive director of the Georgetown Project on State and Local Government Policy and Law at Georgetown Law School.

"Legally speaking, the president cannot force states to rescind their shelter-in-place orders. But this is as much of a practical and a signaling question as it is a legal one," said Ilya Shapiro, director of the Robert A. Levy Center for Constitutional Studies at the Cato Institute.

The president doubled down on Monday, tweeting: "Some in the Fake News Media are saying that it is the Governors' decision to open up the states, not that of the President of the United States & the Federal Government. Let it be fully understood that this is incorrect."

Both Shapiro and Chertoff say it's unclear what authority President Trump is referring to, but that he could be thinking of using his presidential powers to withhold federal disaster assistance from states that don't want to reopen as quickly as he would like.

"Now all 50 states have disaster regulations that activate certain things. And as you can see, the federal government has been providing a lot of money to the states. So in theory, he may be thinking that he's going to issue an executive order and go on to say, if you don't play ball with me, we're going to withdraw that money," Chertoff said.

That kind of move would likely be challenged in court, but it's not unprecedented for this administration.

In 2017, the Justice Department said it would withhold federal grant money for local law enforcement agencies in cities and states that considered themselves sanctuary jurisdictions.

Seven states and New York City sued the federal government over the order. In February, a federal appeals court sided with the Trump administration.

Shapiro says President Trump's rhetoric on reopening the government is likely a signaling tactic to states and voters.

"It could be that the president is simply trying to project leadership," Shapiro said.

But some state and city leaders are already pushing back on his proposed timeline.

"This is not going to be a rush the gates, everybody is suddenly open all at once. We have to understand that we must reopen in a way in which we are able to stimulate the economy while at the same time ensuring that we contain the spread of COVID-19," Texas Gov. Gregg Abbott told reporters at a briefing on Monday.

"You’ll turn that valve very slowly, reopening the economy, more essential workers – do it carefully, do it slowly, and do it intelligently," New York Gov. Andrew Cuomo said at a briefing Monday.