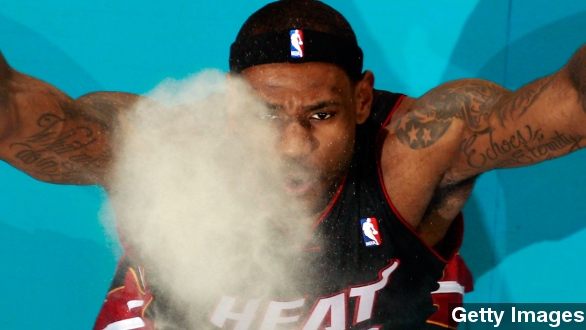 By Matt Moreno
July 10, 2014
Word of security beefing up near LeBron's Bath Township, OH home sparked speculation it was in preparation for his "decision."
SHOW TRANSCRIPT

Is it over?! Has "the decision" been made? (Via Getty Images)

Yes — according to journalists on Twitter. We're sure you've heard this before, but hear us out.

Both WEWS reporter Bob Jones and Akron Beacon Journal reporter Phil Trexler say local police have been warned that LeBron will make his decision tonight and they should be prepared for the town's reaction.

​​And check out how much attention LeBron's Bath Township, OH house was getting! This from Cleveland.com reporter Mary Kilpatrick. (Via Twitter / @_marykilpatrick)

And Fox Sports Ohio reporter Sam Amico said 3:30 Eastern Time is when the announcement would be held. So...

Well, ​NBC's Tom Winter tweeted before said decision was set to go down, that police were, in fact, NOT there awaiting LeBron's word.

And police Chief Michael McNeely didn't give any hints of LeBron's decision, telling Cleveland.com the upped security is the same "as we did four years ago when he made that announcement."

And, to his credit, Amico did stand by his "3:30 p.m." tweet, but sent out some clarification as to where he got that info.

ESPN says there's "no timetable for James' decision" yet, but King James is supposed to go to Brazil for the World Cup this weekend so "a decision before then seems likely"

As to where James will be going? Multiple reports indicate it's between Miami, where he won two NBA championships in four years, or his homestate which he spurnned nationally and left with some bitter feelings from fans. (Via Getty Images | Getty Images)

Now, where LeBron is leaning toward? Well, just ask Twitter.