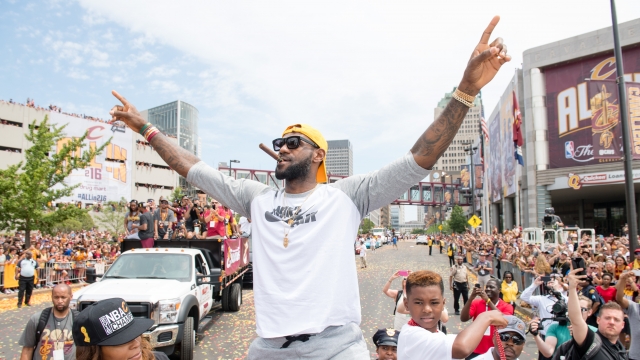 After bringing Cleveland its first-ever NBA championship win, LeBron James says he has no plans to take his talents elsewhere anytime soon.

James enters the offseason with the option of leaving his current contract to test free agency — a decision he infamously made when he left Cleveland in 2010, which didn't exactly go over well with the Cleveland faithful.

But on his return, King James made up for his ungraceful exit by delivering the ring he promised to the title-starved city, which hadn't won a pro championship since the Cleveland Browns won the 1964 NFL Championship. For some perspective, the Super Bowl didn't even exist back then because the NFL and AFL were two totally separate leagues.

The 31-year-old appeared to be more than content with his current team at its championship parade after being voted unanimous MVP of the Finals.

Before jumping aboard the championship parade float, James told Cleveland.com: "I love it here. I love being here. I love my teammates."

James averaged 29.7 points, 11.3 rebounds and 8.9 assists in the hard-fought seven-game series against the defending champions the Golden State Warriors.

This video includes clips from ESPN and CNN and images from Getty Images. Music provided courtesy of APM Music.