LeBron James Flopped, And The Internet Mercilessly Trolled Him For It 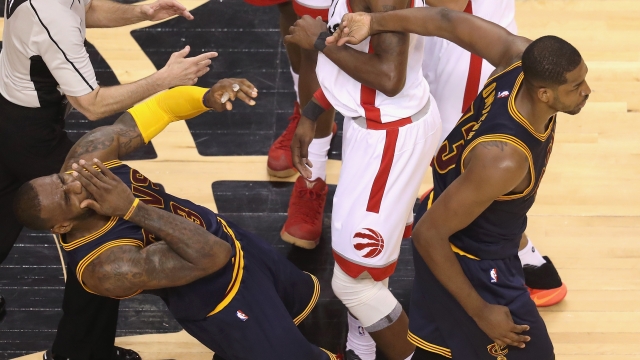 During Game 3 of the Eastern Conference Finals, LeBron James went down hard after an elbow from his teammate. The internet reacted as expected.

As arguably the best player in the game right now, the Cleveland Cavaliers' LeBron James can sometimes be a lightning rod for criticism.

Especially when he crumples to the floor after getting hit by his own teammate.

During the first half of the Eastern Conference Finals Game 3 against the Toronto Raptors, James fell to the floor hard after a scuffle between teammate Tristan Thompson and Raptors players. Thompson's arm came up, hit James in the mouth and the Raptors were hit with a technical.

"Not trying to sell a call. I got hit with an elbow. [I] didn't know it was from my own teammate. I thought it was DeMarre [Carroll]. ... Nah, I wouldn't sell a call. For what? There was no call there to be [sold]," James said in a postgame press conference.

The Cavs were down by 18 at that point and needed anything they could get to climb back into the game. So James' reaction, given the circumstances and the actual crime, was seen as a bit over the top.

And the internet took notice. James was trolled in Vines, GIFs, pics, polls and everything in between.

Even rapper and Raptors ambassador Drake got in on the trolling. Ouch.

Flop or not, the Cavs are still in the driver's seat following Saturday's loss, leading the series 2-1. They'll tip off against the Raptors again on Monday.

This video includes a clip from KIA and images from Getty Images. Music provided courtesy of APM Music.