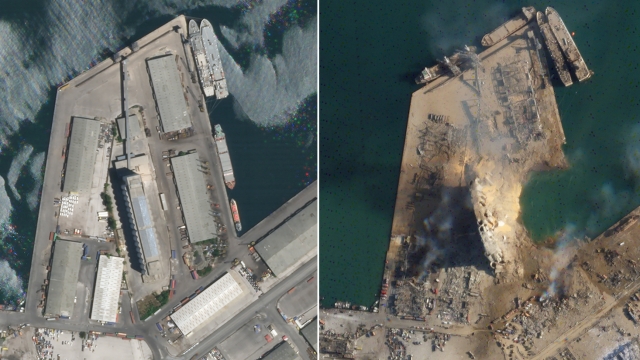 SMS
Lebanon's President Admits He Knew About Beirut Stockpile For Weeks
By Terace Garnier
By Terace Garnier
August 7, 2020
As the investigation into the Beirut explosion continues, the Lebanese president admits he knew about the stockpile of ammonia nitrate for weeks.
SHOW TRANSCRIPT

The cause of Tuesday's blast in Beirut may be less clear than thought. Lebanon's president says there are two possible reasons: negligence or "external intervention." He's requesting satellite images from France to determine if a missile was involved. And the pentagon is also saying it's not clear-cut yet.

"The situation has been fast evolving, and that on Tuesday and Wednesday, we saw different information come to light. The president and secretary have both been consistent that we've reached no definitive cause for the blast," Jonathan Hoffman, assistant to the secretary of defense for public affairs, said.

Protesters in Beirut are directing their anger at the government. These violent protests erupted overnight.

"The main fault here, the main question is: How did 2,700 tons of this be left in a warehouse for it looks like now a number of years? ... Some people raised an alarm but you know, nothing was done for a long time and unfortunately, this was the result," Brain Castner, Amnesty International Crisis Team weapons investigator said.

Lebanon's president insists he only knew about the stockpile for about three weeks, despite it being involved in court cases for years. So far, the Lebanese government has taken 16 people into into custody, according to a state news agency.

And Hezbollah is denying rumors it was storing weapons at that warehouse.

The Lebanese government is giving an investigative committee four days to determine who or what is responsible for the explosion. In the meantime, protests are planned into the weekend.