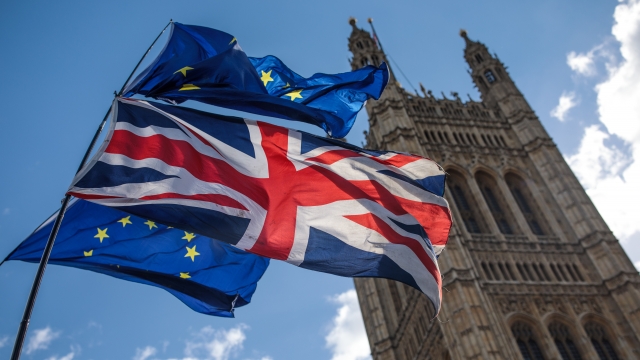 A no-deal Brexit could lead to severe shortages of food, fuel and medical supplies in the U.K., according to a government report leaked to British newspaper The Sunday Times.

Britain is scheduled to leave the EU on Oct. 31. The document outlines "Operation Yellowhammer," the government's plan for a potential no-deal Brexit. It suggests the U.K. could face severe socioeconomic instability if it breaks out of the bloc without an agreement.

In addition to shortages and price hikes, the plan says the return of a hard border with Ireland could cause a "three-month meltdown" at entry ports due to extra checks. It also notes protests could flare across the U.K. and that two oil refineries could close, leaving thousands without jobs.

Brexit's supporters were quick to dismiss the report as "scaremongering" by Brexit's critics. A Downing Street official even alleged one of Theresa May's former ministers leaked the report to sabotage Prime Minister Boris Johnson's meetings with European leaders next week.

Michael Gove, the Cabinet minister responsible for planning a no-deal Brexit, called the report an "old document" and said it represented a "worst-case scenario." He added that Johnson's government had already taken "very significant" steps since the dossier was compiled to ensure the U.K. is prepared to leave, "deal or no deal."

Johnson has pledged that the U.K. will leave by Oct. 31, "do or die", and he's pushing for a fresh agreement with the EU — one that does not necessarily prevent a hard border with Ireland. The EU, though, has said repeatedly it will not renegotiate the current deal. And even if Britain leaves without an agreement, the bloc has said it won't talk trade with the U.K. unless the issue of the Irish border is resolved.

As the Brexit deadline nears, a coalition of more than 100 MPs has called on Johnson to recall Parliament to allow for debate — a move supported by Labour leader Jeremy Corbyn.

Corbyn has vowed to "stop a disastrous no-deal Brexit" and has accused Johnson of provoking a crisis in the U.K. to create a tax haven for the "super rich." Corbyn has also promised to hold a vote of confidence in Johnson's leadership if Brexit talks continue to stall.