It Appears Clinton Hasn't Always Been Opposed To Secret Plans 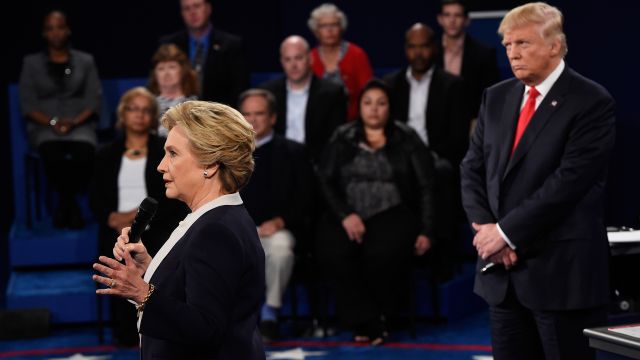 SMS
It Appears Clinton Hasn't Always Been Opposed To Secret Plans
By Ryan Biek
By Ryan Biek
October 16, 2016
Hillary Clinton has criticized Donald Trump's "secret strategy" to defeat ISIS, yet she may have at one point favored covert foreign policy.
SHOW TRANSCRIPT

"If I win, I don't want to broadcast to the enemy exactly what my plan is," Trump said during a presidential forum.

"The secret is he has no plan," Clinton said in September.

But emails recently leaked by WikiLeaks show that Clinton, at least at one point, also favored a more covert foreign policy.

"We have announcements coming out of Washington and coming out of Iraq: 'We will be attacking in Mosul in three weeks or four weeks.' ... Why can't they do it quietly?" Trump said during the second presidential debate.

In a speech to Goldman Sachs in 2013, Clinton reportedly said, "Now, you know, everybody can't help themselves. They have to go out and tell their friendly reporters and somebody else: 'Look what we're doing,' and 'I want credit for it,' and all the rest of it."

The quotes seem very similar, but they aren't such an apples-to-apples comparison. Clinton was advocating for covertness against the Syrian regime, not ISIS.

There could be greater repercussions for announcing plans to work against an internationally recognized state.

As of Sunday morning, many outlets had noted they still hadn't been able to confirm the authenticity of the leaked emails.

Still, some in the media have found Clinton's criticisms of Trump's secrecy ironic.

During her campaign, Clinton has laid out a plan for combating ISIS. It includes more coordinated airstrikes but also a no-fly zone that would limit Syrian government airstrikes against non-ISIS rebels.