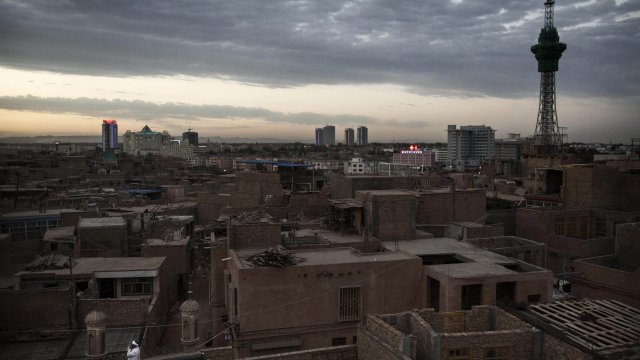 The International Consortium of Professional Journalists published the classified Chinese documents, which the group calls an operations manual for running the camps in the Xinjiang region. The papers emphasize the importance of secrecy, including calling for a secret police to prevent inmates from staging a coup.

The documents also show how Chinese authorities monitored and dictated practically every aspect of the detained Uighurs, Kazakhs and other Muslims. For example, one passage states video surveillance should monitor the entire camp ground with "classrooms free of blindspots."

The manual also outlines steps for "behavior management." Authorities are instructed to implement a strict regimen for each inmate, including when they can eat and use the bathroom. It also calls for structure down to the finest detail when it comes to their bed position and classroom seat.

A Chinese government spokesperson told The Guardian this latest document leak is "pure fabrication." The report clashes directly with the reasoning the Chinese government uses to justify the camps. Officials say the detainees were undergoing vocational training, arguing the campaign is an attempt to combat extremism.

To be clear, this is different from the set of documents published by The New York Times. It detailed China's buildup to the crackdown and Chinese president Xi Jinping reportedly telling officials to show "absolutely no mercy."

The United Nations estimates at least 1 million ethnic minorities have been detained at these reeducation camps since 2017.