Leaders React To The Death Of Evangelist Billy Graham 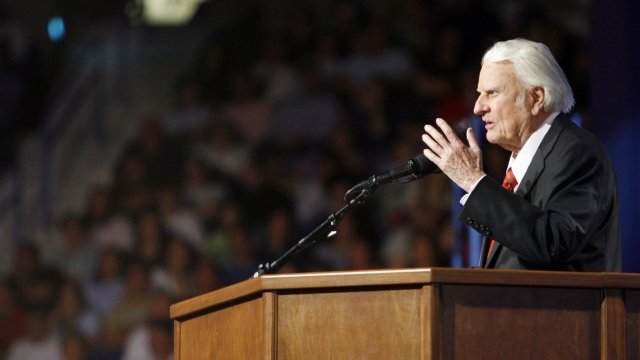 The nation is reacting to the death of Christian evangelist Billy Graham. He died Wednesday at age 99.

"Today, Wheaton College joins the worldwide church in celebrating the life and mourning the death of the Reverend Dr. Billy Graham," said Wheaton College President Philip Graham Ryken. "Dr. Graham's most important work was not at Wheaton, but it was preaching the gospel all around the world."

His son Franklin Graham confirmed his father's death and said, "He departed this world into eternal life in Heaven."

President Donald Trump was at Graham's 95th birthday celebration and said on Twitter Wednesday: "There was nobody like him! ... A very special man."

Former President Barack Obama called Graham a "humble servant who prayed for so many — and who, with wisdom and grace, gave hope and guidance to generations of Americans."

In a phone interview with CNN, televangelist Joel Osteen said as a kid, he looked up to Graham.

"You know, we knew this time was coming, but it's still real interesting to think Billy Graham is not here with us, so to me, it's the loss of a hero," Osteen said.