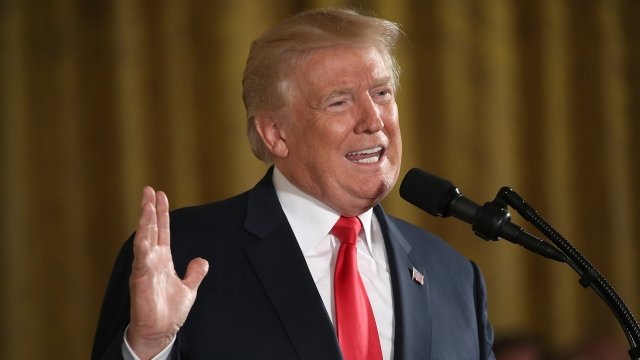 By Eugene Daniels
July 31, 2017
It seems like U.S. allies are ready for a relationship reset in the Middle East.
SHOW TRANSCRIPT

If you had to pick one region of the world to not be a fan of President Donald Trump, you'd probably pick the Middle East, right? Well, apparently, you'd be wrong.

If you're surprised that the Middle East loves Trump, you're not the only one. I mean, this is the man who proposed a Muslim ban during his campaign and, when in office, banned migrants from some Muslim-majority countries. And yet, leaders there think he might be a better partner for them than his predecessor.

We've already seen signals that the Middle East is a bit warmer toward Trump than toward former President Barack Obama. During his visit in May, Middle East leaders rolled out the red carpet for Trump, and the king of Saudi Arabia met him at the airport — something he didn't do when President Obama visited in 2016.

Politico spoke with Lebanese Prime Minister Saad Hariri, who recently met with President Trump, about why there is so much hope for the Trump-Middle East relationship.

"It's the clarity, you know," Hariri said. "Maybe I would not like the position maybe one day, but it's clarity. Once things are clear, we can work around them."

Hariri pointed to some of the common critiques of the Obama administration's Middle East policy, including pulling out of Iraq despite allies in the region wanting the U.S. to stay put. The "red line" drawn by Obama in Syria is also a huge reason for the antipathy to the previous administration. Obama promised there would be consequences after Syrian President Bashar al-Assad gassed his own people, but nothing was ever done.

Though Trump's foreign policy is basically summed up with "America First," his tough talk on Iran and his promise not to "lecture" our allies in the Middle East are music to the ears of leaders in the region.