Venezuela's Controversial Vote Is Sunday; Here's What You Should Know 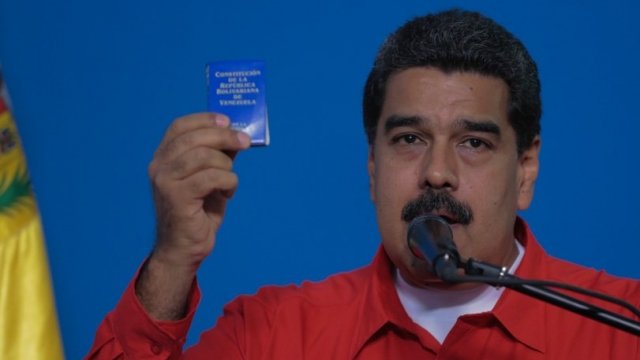 SMS
Venezuela's Controversial Vote Is Sunday; Here's What You Should Know

By Jake Jones
July 30, 2017
The tension started in 2015 when President Nicolás Maduro lost support in the National Assembly.
SHOW TRANSCRIPT

Venezuela is holding a controversial vote to establish a "constituent assembly" on Sunday. The country has been rocked by political upheaval combined with an economic crisis. Let's take a look back at what led up to the vote.

It started back in 2015. President Nicolás Maduro lost support in the country's National Assembly. The opposition won 112 of 167 seats. Following that defeat, Maduro stacked the Supreme Court with his supporters, a move that would protect him from impeachment.

Maduro then tried to dissolve the assembly and give legislative power to the Supreme Court. That move was undone three days later, but not without sparking a new, more intense wave of protests.

Then Maduro announced plans to rewrite the country's 18-year-old constitution through the election of a new "Constituent National Assembly."

Opposition saw this as yet another power grab with the potential of moving Venezuela toward a one-party dictatorship under Maduro.

In the weeks leading up to the vote, opposition leaders organized a referendum against the new assembly. More than 7 million Venezuelans — about 37 percent of eligible voters — participated. Nearly all — 98 percent — denounced the plan for a new constitution. But since the referendum wasn't sanctioned by the government, the vote was non-binding.

The opposition also organized a 48-hour strike across the country a few days before the vote, followed by mass protests on Friday. Maduro countered with a ban on all protests.

Opposition members are boycotting Sunday's vote, which means all the candidates for the new assembly are Maduro supporters. The new assembly would have 545 seats and have authority over any existing government institution.

That power has led to fears Maduro will again try to dissolve the current National Assembly and arrest his critics, something he's promised to do.

Opposition leaders are protesting the vote in Caracas, the country's capital.