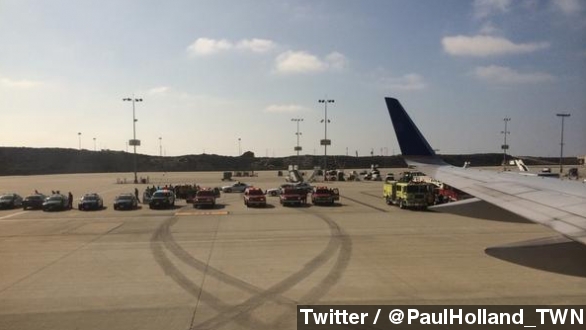 By Matt Picht
October 12, 2014
L.A. officials reportedly argued over how to respond to an Ebola scare, showing how fragmented Ebola responses across the U.S. can be.
SHOW TRANSCRIPT

Let's get this out of the way: officials determined the sick passenger who began vomiting and exhibiting flu-like symptoms on a flight from New York to Los Angeles Sunday does not have Ebola.

But the risk of another outbreak of the virus was great enough to ground United Airlines Flight 703 at LAX, quarantine all 148 passengers on board for hours, and reveal a few unsettling details about how agencies respond to the threat of the virus.

Aircraft personnel first sounded the alarm mid-flight, when the ill passenger stated they'd recently been to Africa. The plane was greeted by the Los Angeles Fire Department when it landed at 1:58 p.m.

As multiple passengers on the plane reported via Twitter, the flight was moved to a separate, remote terminal, where it sat for over two hours while multiple agencies were apparently arguing about what to do with the passengers.

Eventually, the authorities determined the ill passenger was likely exhibiting symptoms of motion sickness rather than Ebola, and furthermore had only been to South Africa rather than West Africa where the outbreak is centered. The patient was evacuated and the passengers were sent home shortly after.

The LAFD said in a statement responders followed a CDC-recommended protocol, which included isolating the plane from the rest of the airport, to the letter. There was no mention of any inter-agency dispute.

This Ebola scare comes just as the CDC confirms a second case of Ebola inside the U.S., this time in a nurse who treated the first Ebola patient at a Texas hospital. The agency is now looking at the hospital's protocols to determine how the nurse was infected. (Video via KTVT)

Incidents like these highlight potential flaws in Ebola procedures across the U.S. According to an informal National Nurses United survey, 76 percent of nurses say their hospital hasn't trained them on Ebola procedures.

And it's not just nurses who are concerned.

DR. LINDA GIRGIS ON NBC: "There's a gap in the system getting the information from the CDC down to the doctors on the front line."

That doesn't mean the U.S. is completely unprepared — some hospitals, like this one in New Jersey, have conducted exhaustive drills to practice receiving Ebola patients.

But as one Yahoo writer points out, not all response plans for Ebola are created equal. Current preparations range from practice drills to handing out flyers, and there's no effective way to standardize protocols.

"In the decentralized U.S. health care system, hospitals don't necessarily have to take the CDC's advice — and federal funding streams to help them do so have been slashed in recent years. ... Hospitals have to make tough choices about whether it's worth taking valuable nurses and doctors out of circulation for time-consuming drills."

The CDC does have Ebola preparedness guidelines for healthcare workers publicly available on its website. It's just a question of whether agencies and individuals are properly prepared to follow them, should the need arise.