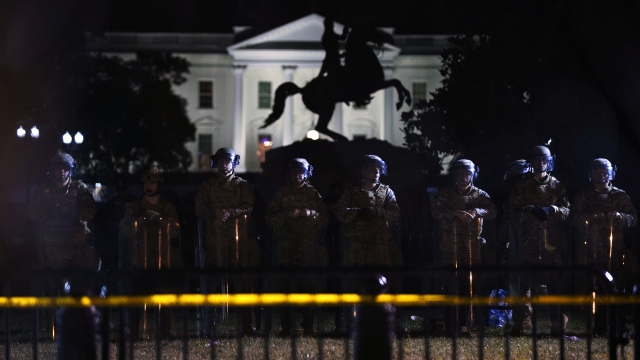 SMS
Disobey Military Orders? Law Group Offers Troops Advice Amid Election
By Sasha Ingber
By Sasha Ingber
October 15, 2020
The Orders Project aims to help military personnel worried about the legality of what they may be ordered to do around the election.
SHOW TRANSCRIPT

The risks of disobeying orders in the military are high: It can mean dishonorable discharge, forfeited pay and confinement. But a new legal group is offering free advice to personnel who worry about what they may be called upon to do around the election.

"We've been approached by both soldiers and commanders who are concerned that they may be called upon to do things that raise substantial questions as to the legality of orders that they either have to honor or give," says Eugene Fidell, one of the founders of the group.

The Orders Project started days ago and currently consists of more than a dozen former military lawyers. They encourage active duty members to first seek information from their branch’s legal division. Fidell says the network formed to serve as a second line of defense, after military personnel were dismayed by the use of force to quell protests in Washington, D.C.’s Lafayette Park in June.

"If we wait until, you know, things fly apart, it's too late then. We have to have a structure in place," Fidell says.

It comes after the commander in chief wouldn’t commit to accepting the election results at the first presidential debate.

"If I see tens of thousands of ballots being manipulated, I can’t go along with that," said President Trump.

"We've had the president and the attorney general suggest that they may send troops and others out there to protect the election. That's their words, but could actually be used to suppress votes," says Ornstein.

Gen. Mark Milley, Chairman of the Joint Chiefs of Staff, says the military won’t get involved in politics.

"We have a very, very long tradition of an apolitical military that’s embedded really from the days of George Washington," Milley said.

"We’re going through a moment in our history where everyone just needs to do a refresher course on their rights and their responsibilities. And not just assume that our senior-most leaders are going to always be thinking about those things on our behalf."

As part of election preparations, a National Guard spokesperson tells Newsy about 300 troops in Alabama, and another 300 in Arizona, make up new, rapid response military police units. The National Guard says it has also increased training on how to deal with protests.

"You have a defense if you have followed a lawful order. If you follow an unlawful order, American military justice does not give you a defense," says Fidell. "So they do have to know if they're being asked to do something that's illegal."