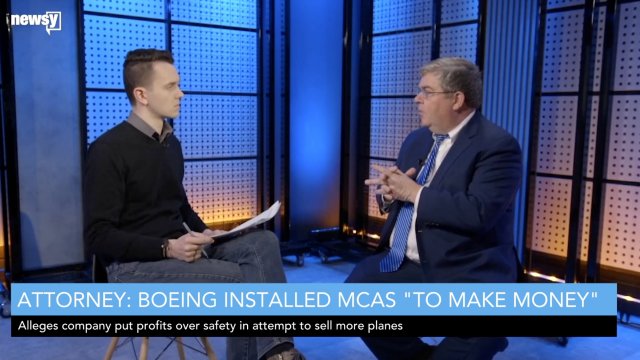 SMS
Lawyer Suing Boeing: 20 Whistleblowers Have Contacted Me About 737 MAX
By James Packard
By James Packard
April 10, 2019
A lawyer suing Boeing in connection with a 737 MAX crash says the company covered up fatal flaws. This is his first one-on-one interview since filing.
SHOW TRANSCRIPT

Kevin Durkin represents the family of Samya Stumo, a woman who died on board Ethiopian Airlines flight 302. He says the 737 MAX was never safe, and accuses Boeing of installing an unfit system on the plane to make its plane more marketable to airlines.

Durkin's lawsuit says Boeing and the FAA have too cozy a relationship, and the FAA enlisted under-trained employees to oversee MAX safety certification. The FAA has publicly refuted that, but told Newsy, "we don’t comment on lawsuits." Boeing says it is committed to fixing its planes.