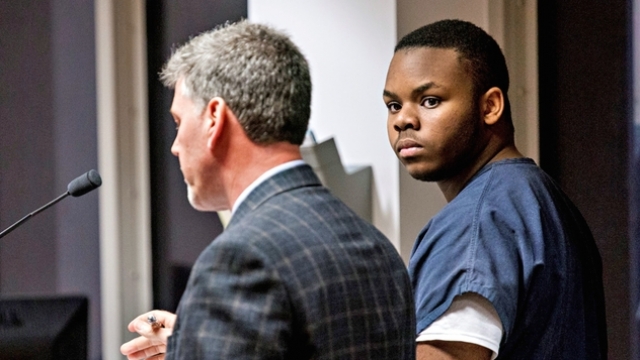 SMS
Lawyer Says 'Dr. Love' Has Donald Trump's 'Entrepreneurial Spirit'
By Katie Link
By Katie Link
March 2, 2016
Malachi Love-Robinson was arrested, again, in Florida amid accusations of theft. His lawyer says he has the "entrepreneurial spirit" like Trump.
SHOW TRANSCRIPT

Malachi Love-Robinson, aka Dr. Love, is back in the headlines again. The Florida teen, who’s accused of impersonating a medical doctor, is also accused of stealing from an old lady. Oh, and his lawyer is likening him to Donald Trump.

Love-Robinson, who according to his website offers services like "food and herb therapy" and "phototherapy," was originally arrested last month on grand theft charges. He posted bail and publicly denied any wrongdoing.

"This was about helping the community. And a lot of people look at it in a different light, and they have a lot to say," Love-Robinson told WPTV.

The teen was rearrested Tuesday on more theft charges after an 86-year-old woman claimed she paid him nearly $35,000 to treat her severe stomach pains. He made bail again and still denies any wrongdoing.

"Accusations are merely accusations, and services, you would have to define that. Whether she paid for me to just show up that’s up to her," Love-Robinson told ABC.

According to ABC, Love-Robinson faces seven charges including grand theft and practicing medicine without a license. The lawyer fighting those charges on his behalf told Newsy’s partners at WPTV his client’s "entrepreneurial spirit" plays a role in the case.

A judge released Love-Robinson late Tuesday with the condition that he receives a mental health evaluation.

This video includes clips from WPTV and ABC and images from Getty Images.