Kids Come To The Border Alone, But This Lawyer Has Their Back 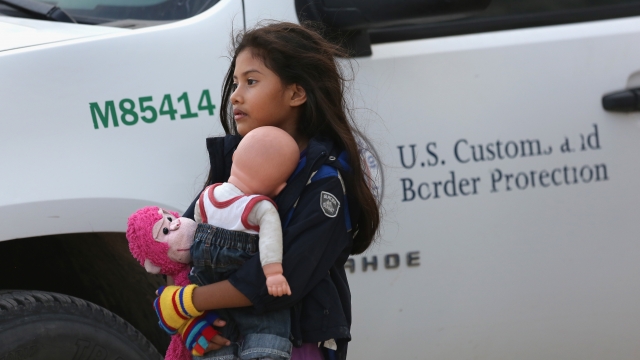 SMS
Kids Come To The Border Alone, But This Lawyer Has Their Back
By Ben Schamisso
By Ben Schamisso
January 17, 2019
Newsy sat down with the director of an organization that advocates for some of the most vulnerable migrants kids once they are in U.S. custody.
SHOW TRANSCRIPT

Every week, hundreds of children arrive at the U.S.-Mexico border without their parents. Some are victims of human trafficking, some are running away from gang threats and some want to reunite with family members already in the U.S. Most of them come from Guatemala, Honduras, El Salvador and Mexico.

"The children have really been through incredible trauma in their home countries. They've seen their entire family killed, they've seen friends murdered in front of them, and they're escaping for their lives, in many cases," said Maria Woltjen.

Maria Woltjen has been fighting for their rights for 15 years. As a result of her work, the Chicago-based lawyer was recently named a 2018 Chicagoan Of The Year.

"A lot of our job is to make sure that those people acknowledge and recognize that these are kids. Because judges, asylum officers, they're all trained in the system. And the system is built just for adults. So sometimes they forget that they have children in front of them."

Unlike other court settings, immigration courtrooms treat kids just like adults. And because representation is not guaranteed, many children appear in court without a lawyer on their side. But in order to help judges make informed decisions, in some cases the government asks Woltjen's organization to issue best-interest recommendations.

"We take the most complicated of the complicated cases. So very little kids, kids with mental competency issues. One example would be a child, a girl, who wants to go back to her trafficker. She's 13 years old, she thinks she's in love with her trafficker. She just testified against him in open court, so she's in danger. But she says she wants to go back to him. And so our job in that case would be to recommend that it's not in her best interest to go and be with that trafficker."

"Obviously, the best outcome is that a child who is eligible for protection actually gets protection, gets a green card, is granted asylum and then eventually becomes a citizen. But there also are cases where it's in the child's best interest to return to the home country. We've seen parents deported while their 4-year-old is still here in detention. So it's making the argument that it is safe for that child to go back."

Woltjen founded the Young Center for Immigrant Children's Rights in 2004. Back then, only around 8,000 unaccompanied children made it to the southern border every year. But last year, the number of kids who arrived at the border on their own was almost 60,000. Only a fraction of these minors will be matched with the Center's lawyers, social workers and translators.

"It's imperfect because we don't get referred all of the cases where it might be appropriate for us to be a child advocate. So right now, we probably serve about 800 children. But we expect that with our expansion, we will serve 50 percent more children. So another 400 children."

Fortunately, the Center has more staff and locations than ever before — and it’s expanding fast. That's partly a result of the Trump administration's family separation policy last spring, which brought a lot of attention and donations to the organization.

"We were interviewed by different news outlets about the actual work that we were doing. And we came to the attention first, it was the Clooney Foundation For Justice. They gave us a very generous grant. And, of course, they also publicize that grant."

Besides crafting best-interest recommendations for the most vulnerable kids, the Young Center also advocates for policy change at the national level.

"We have relationships with people in the government. And we make the arguments we have to be very careful about the tone that we use. But our focus is on child protection. Even under the Obama administration, it wasn't perfect."

Newsy's Ben Schamisso: "What is 2019 looking like for you and for immigrant children?"

Maria Woltjen: "The government is trying to change the law so that they can deport all of the kids directly from the border. So that's something else that we have to that we're prepared to fight. And I don't know if you remember, but back in October, the White House issued its wish list on immigration, No. 1 was, of course, the border wall, but No. 2 was [the ability to deport] unaccompanied children. So I don't think there's going to be an end. I think the government has lots and lots of ideas."