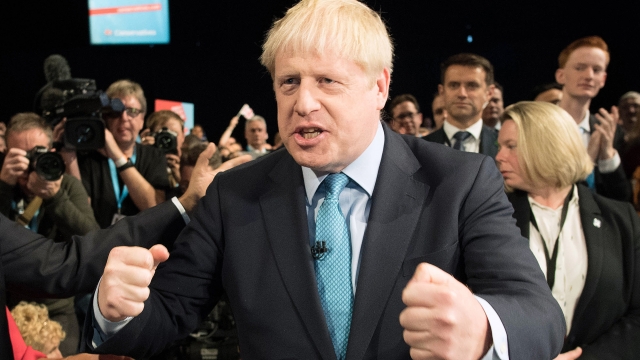 SMS
Lawsuit Seeks To Fine Or Jail Johnson If He Goes It Alone On Brexit
By Peter Hecht
By Peter Hecht
October 4, 2019
A lawsuit demands that prime minister face fines or jail if he fails to comply with Parliament's directives on E.U. departure.
SHOW TRANSCRIPT

British Prime Minister Boris Johnson says he would rather be "dead in a ditch" than to delay pulling the United Kingdom out of the European Union. But a case before a Scottish court is raising this question: Would he rather be in jail?

Last month, lawmakers in the U.K. dealt Johnson a major defeat by voting to require the prime minister to request a Brexit extension if he can't secure a departure deal with the E.U. by Oct. 19. Now a lawsuit from a Scottish member of Parliament demands that Johnson face punishment - including fines or jail - if he fails to comply.

People in the U.K. aren't exactly wagering on locking up the prime minister. But the case reflects tensions over Brexit that are shaking the government.

This week, Johnson presented a new plan that attempted to assure Ireland that it won't face a hardened border as Northern Ireland bolts from the E.U. as part of the U.K. He made this argument in Parliament:

"There will be no need for checks or any infrastructure at or near the border between Ireland and Northern Ireland. Indeed, I have already given a guarantee that the UK government will never conduct checks at the border. And we believe that the EU should do the same. So there is absolute clarity on that point."

"Mr. Speaker these plans are simply unworkable. Mr. Speaker but what we have before us is not a serious proposal to break the deadlock. Instead these proposals are nothing more than a cynical attempt by the Prime Minister to shift the blame for his failure to deliver. We can only conclude his political adviser was telling the truth when he called the negotiations with the EU a sham."

Now The E.U. is depicting his Brexit plan as "problematic."

Under Brexit, the U.K. is scheduled to leave the E.U. on Oct. 31. Johnson says he is making his final offer for a deal. And his office says he won't seek an extension if he fails to get one.