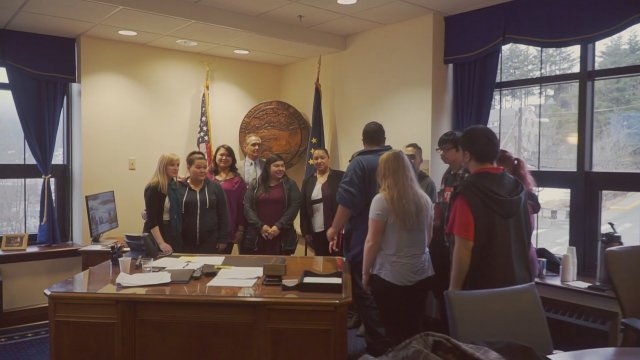 "I was 12 years-old and there was reoccurring abuse in my house, as well as neglect that resulted in us being taken away," said 22-year-old Natilia Edwards of Anchorage, Alaska.

Edwards and her four sisters, all Alaskan Natives, were placed in foster care outside of their tribal community.

"So, I was in care for a total of seven years and then I was in a total of 14 different placements," said Edwards.

But a change in the way the federal government protects and tracks kids like Natilia and her sisters is worrying some. And there are special reasons why.

Despite making up just 1% of the U.S. juvenile population, American Indian/Alaska Native are disproportionately represented in the foster care system. They make up  2.6% of kids in foster care, according to the most recent government data.

"The institutional racism, some of the bias and also just some of the staff who are working with Native children and families, not having the kind of the relationships you need to have with tribal communities, it leads to children being removed in numbers that are much higher than they should be," said David Simmons, Government Affairs and Advocacy Director at National Indian Child Welfare Association.

For centuries, American Indian children were forcibly taken from their families and tribes; often placed in boarding schools and adopted by white families without consent.

In 1978 Congress passed the Indian Child Welfare Act, or ICWA. It requires, in part, that states first identify family or tribal members who can take a child before placing them in a home outside of the tribal community. And they had to continue to keep track of Native children in their systems. However, that hasn't always happened.

"There has never been data, federally mandated data collected on all elements of the Indian Child Welfare Act," said Professor Kate Fort of Michigan State University College of Law. "So we actually don't have nationwide data at all on ICWA."

So, in 2016, the Obama administration worked to change that. It required states to use the federal, Adoption and Foster Care Analysis Reporting System, or AFCARS, to expand the amount of information states gather about American Indian and Alaska Native children.

This summer, the Trump Administration rolled back that expansion. States no longer needed to gather all the additional data related to American Indian and Alaskan Native children. Also, they will no longer collect information related to youth who identify as LGBTQ+.

According to the Department of Health and Human Services, its "streamlined" version came after some states described the data collection as overly burdensome. The administration also said it would be too costly.

A lawsuit filed today in federal court aims to stop the rollback and maintain the 2016 data collection.

"The effect of this rollback, it's going to be to keep these issues in the dark, to keep up, to keep LGBTQ plus children and American Indian and Alaska native children essentially in the shadows so that we're not collecting data on them and thus not doing all that we can to address the problems," said Senior Attorney Jeffrey Dubner of Democracy Forward.

Supporters say it’s all to ensure every effort is made to keep American Indian and Native American foster children protected and connected to their tribes and culture. Something Natalia wishes she would have experienced.

"I mean, how cool could it be, you know. I wouldn't have to have all these thoughts and these wonders," said Edwards. "I would really know and be so secure within my culture, my sense of community."