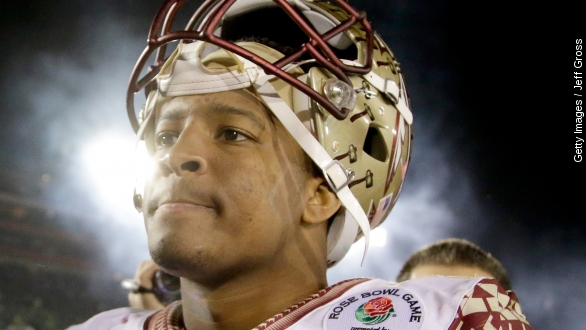 Former Florida State University quarterback Jameis Winston is facing a new lawsuit from the woman who accused him of rape in 2013.

Erica Kinsman, a former Florida State University student, is seeking damages over an alleged sexual assault that she says occurred in December of 2012.

An investigation was conducted by a Florida state attorney but no charges were filed.

"We have a duty as prosecutors to only file those charges if we have a reasonable likelihood of a conviction. After reviewing evidence, we did not feel we could meet that burden," Florida state attorney Willie Meggs said.

The civil complaint reportedly includes little new information about the case. So why would Kinsman and her attorney file a lawsuit now after a prosecutor decided there wasn't enough evidence for a criminal trial?

It's uncertain what the exact reason is, but it's also hard to ignore the timing of the case. The NFL draft is just two weeks away and Winston is expected to be drafted by the Tampa Bay Buccaneers as the No. 1 overall selection.

Also, arguing a case in civil court is different than a criminal trial, where the burden of proof is much higher because a person's freedom could be at stake. In criminal cases, the prosecution must prove the case "beyond a reasonable doubt."

That doesn't apply in a civil case, meaning a plaintiff just has to make a stronger argument than the defense to win a case.

Kinsman's complaint against Winston alleges sexual battery, assault, false imprisonment and intentional infliction of emotional distress arising out of forcible rape. She is seeking $15,000 in damages.

"I know I made mistakes and I know I have a past, but right now it's about moving forward and earning the trust of all these 32 teams out there," Winston said in press conference before the NFL Scouting Combine.

Winston has not yet commented on the suit but his lawyer has said in the past that if a civil suit was filed against Winston, then he would file a counter-suit. (Video via Florida State University)