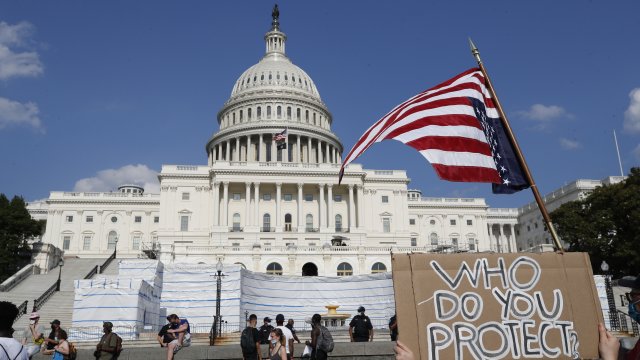 House Democrats are pressing ahead, introducing bills focusing on police accountability. Congressional Black Caucus Chairwoman Karen Bass says she wants to create a nationwide database to prevent fired officers from getting jobs in neighboring towns. Other bills would include a requirement for law enforcement to provide data on use of force within their departments and hold officers accountable for their actions during a protest.

Former Republican-turned-independent congressman Justin Amash also introduced a bill with Democratic congresswoman Ayanna Pressley that would end "qualified immunity," which makes it hard to sue officers for excessive use of force.

Legislation that would outlaw chokeholds is also being considered. House Speaker Nancy Pelosi told reporters Democrats expect to introduce a full package on police brutality and racial profiling reforms on Monday. The House Judiciary Committee is planning to hold a hearing next week on police brutality as well.

Sen. Tim Scott, the only Black Republican in the upper chamber, is reupping his 2017 Walter Scott Act, named after one of his constituents killed by police. His bill would also require law enforcement agencies to report the use of lethal force.

Multiple committees in both the House and Senate are also looking to investigate police responses to the protests. At least four House committees are asking for information about the removal of protesters outside the White House on Monday, and the Republican-led Senate Homeland Security Committee is asking for a briefing about outside agitators at protests. While there is momentum for something to happen now, it’s unclear what, if anything, will get done before Congress leaves town in a few weeks.