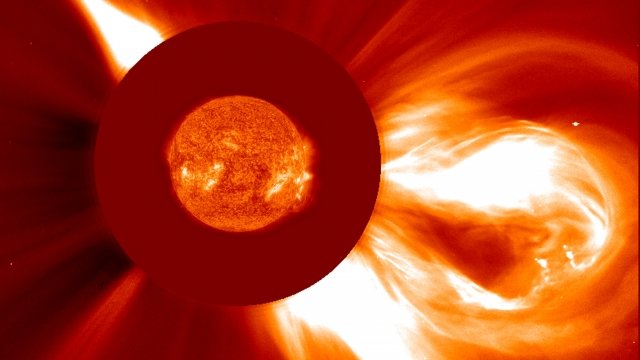 SMS
Why Experts Say We Should All Pay More Attention To Space Weather
By Evan Thomas
By Evan Thomas
April 26, 2018
Lawmakers and scientists alike want a more organized, cooperative approach to forecasting and protecting Earth from space weather.
SHOW TRANSCRIPT

For all our space probes and research missions, we're still learning how solar flares and other space weather can cause trouble here on Earth.

U.S. lawmakers and scientists came together at a recent hearing to push space weather science forward. Forecasting cosmic storms and protecting ourselves from them is a relatively new discipline, and stakeholders have only recently started working toward common goals. They said the current state of the field is a lot like a bunch of people swimming in the same pool.

"Rather than we all being in a swimming pool right now, splashing each other, if we could determine a process to determine our swim lanes, that would really help ease any friction in the future," said W. Kent Tobiska, president of Space Environment Technologies.

Neil Jacobs, assistant secretary of commerce for environmental observation and prediction at the National Oceanic and Atmospheric Administration, said, "It's hard for us to sort of define swim lanes if we don't know what the other swimmers are doing."

New government missions, like the Parker Solar Probe, will update the aging fleet of sun-facing satellites and give us even better eyes to watch the sun's activity. And experts and lawmakers alike hope they can work even more closely with the up-and-coming private space industry to launch missions or gather data on the sun.

And some progress might come through legislation. Both the Senate and the House are working on bills to improve cooperation between the agencies and businesses in that space-weather swimming pool.

"To help everybody get into those lanes," said Colorado Rep. Ed Perlmutter.

Because many lawmakers and scientists who study the sun's influence agree: Earth will be safer once everyone is swimming toward the same goals.