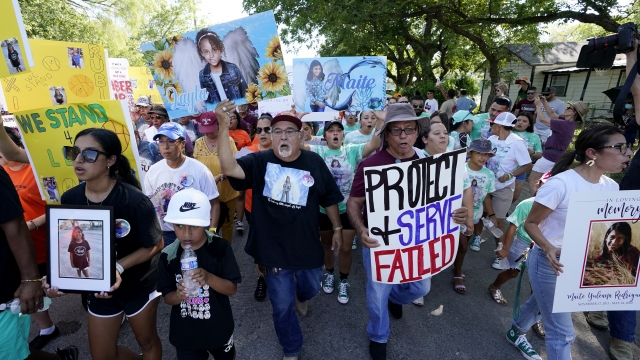 They're once again interviewing the head of Texas' Department of Public Safety and speaking with Uvalde County Sheriff Ruben Nolasco for his account of May 24, when a gunman killed 19 schoolchildren and two teachers.

Lawmakers are also hearing from an official from the Texas State University Alert Center, a police training program, which issued a report critical of the police response.

The Alert Center said that a Uvalde Police Department officer had the gunman in his sights before he entered the school building, but he hesitated to take the shot without explicit permission from a supervisor.

That report was commissioned by the Texas DPS, which led both Uvalde's mayor and state senator, who represent the small city, to dispute the conclusions and dismiss them as part of an overall cover-up of inaction by state law enforcement.

The state House committee is also calling on the local district attorney to release security camera footage from Robb Elementary, which does not depict violence. But it shows evidence of armed police officers stacking up in the hallways and not intervening during the violence.

Monday afternoon, Texas Gov. Greg Abbott also called for the tape's release saying, "let me be clear and let me be adamant. The full truth about what happened in Uvalde must be disclosed to the public, especially the people of Uvalde, and must be done quickly. One thing that must be done is the release of that more than 70-minute video of exactly what happened in the school on that day with only one thing eliminated, and that is any images of those who are victims. Other than that, the public has a right to know. The people of Uvalde have a need to know exactly what happened."

In Uvalde, angry parents and residents protesting against gun violence called for more transparency into the investigation of what went wrong. The feelings were echoed Monday by Uvalde pediatrician Roy Guerrero, who led a ceremony at the White House heralding the passage of Bipartisan Safer Communities Act.

"I'm using this pain to speak to you today as a Uvaldean, and to speak for the parents and victims who seek the truth, transparency and ultimately accountability," Guerrero said.

Guerrero treated Robb Elementary children for gunshot wounds the day of the attack.

"I see children daily with PTSD and anxiety that's now leading to depression. I spend half my days convincing these kids that no one is coming for them and that they are safe. But how do I say that knowing that the very weapons used in the attack are still freely available? Let this only be the start of movement towards the banning of assault weapons," Guerrero said.

President Biden later acknowledged the bill falls short of what he wanted on addressing gun violence.

"Because make no mistake about it, this legislation is real progress, but more has to be done. The provision of this new legislation is going to save lives and is proof that today's politics we can come together on a bipartisan basis to get the important things done, even on an issue as tough as guns," President Biden said.

Punctuating President Biden's admissions of shortcomings during his remarks, Manuel Oliver, the father of a Parkland School shooting victim, interrupted.

"We have to do more than that," Oliver said.