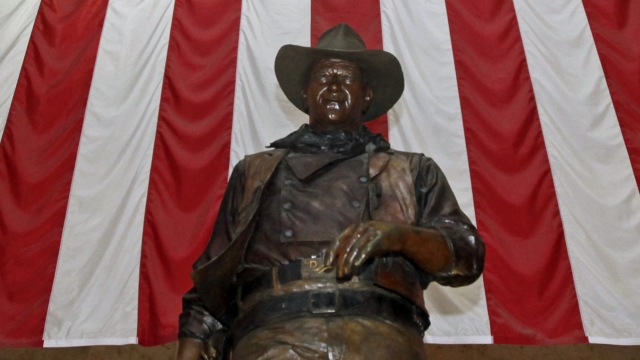 Orange County Democratic Party leaders are calling for the removal of John Wayne's name, statue and other likenesses from the California airport over "racist and bigoted statements" the late actor made decades ago.

County officials approved a resolution last week condemning Wayne's remarks from a 1971 Playboy magazine interview. Some of those include Wayne saying he "[believes] in white supremacy" and that he "[doesn't] feel guilty about the fact that five or 10 generations ago these people were slaves." He also made bigoted statements towards Native Americans and the LGBTQ community over the course of the interview.

As such, local Democratic leaders are pushing the Orange County Board of Supervisors to change John Wayne Airport back to its original name of Orange County Airport.

The chair of Orange County's Democratic Party said in a statement to CNN that "while some outside Orange County may not know of John Wayne's beliefs in white supremacy, many Orange County residents have been calling for his removal for years. We're seeing renewed calls for this right now, and it's time for change."

President Donald Trump objected to the renaming in a tweet on Monday, saying: "Now the Do Nothing Democrats want to take off the name John Wayne from an airport. Incredible stupidity!"