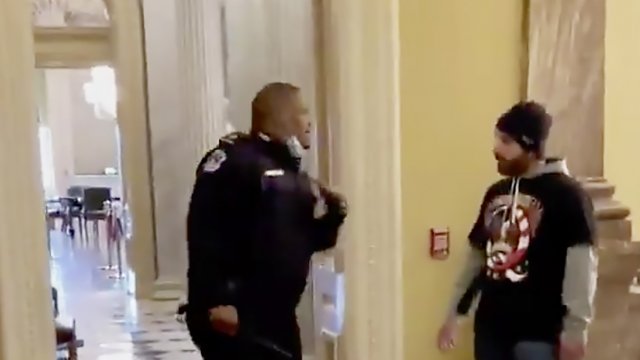 Rioters came even closer to Vice President Mike Pence and members of the Senate than originally thought  — at one point, reportedly, just 100 feet away. Keeping them from getting any closer was one police officer.

Officer Eugene Goodman can be seen in this video luring the mob of angry Trump supporters away from the entrance to the Senate floor and down a different hallway. The Washington Post reports this was just one minute after Pence was moved out of the chamber and into a room along that hallway. A bipartisan group in Congress, including Florida congressman Charlie Crist, want to award Goodman the Congressional Gold Medal. That, and the Presidential Medal of Freedom, are the highest civilian honors.

Fewer than 200 Congressional Gold medals have been handed out in our nation's history. Previous recipients include Winston Churchill, Mother Teresa, Rosa Parks and Nelson Mandela.

All of this comes as we are learning more about what officers endured on Ja. 6, outnumbered both inside and outside the Capitol.

Tens of thousands of National Guard troops and officers are stationed in Washington, D.C., ahead of the inauguration to protect the city and to make sure officers are not outnumbered again.