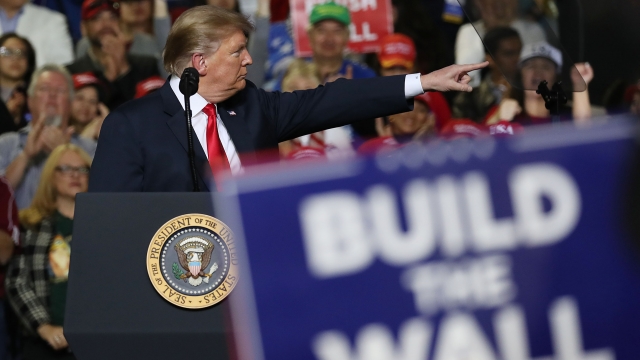 Meanwhile, President Donald Trump held a rally in El Paso, Texas. It was his first appearance at the U.S.-Mexico border since the partial government shutdown ended on Jan. 25.

"Democrats have to stop being so angry and they've gotta start being partners to keep this, really look, is this an incredible miracle that's going on? We want to keep it going. Keep it going and it will keep going," President Trump said.

President Trump wasn't the only one spreading a message. Beto O'Rourke planned an anti-border wall march through El Paso, his hometown, at the same time as President Trump's rally. During O'Rourke's speech, he said El Paso has been the safest city in the U.S. because it is a "city of immigrants."

O'Rourke said: "I think it is terrible to see someone's home or their farm or their ranch or their land to build a wall that we don't need at a time of record safety and security along the border; with record low levels of northbound apprehensions with never a terrorist or terrorist organization having used the U.S.-Mexico border to attack this country. It's absolutely the wrong thing to do. It's a solution in search of a problem. We don't need that."

Monday's agreement will reportedly provide $1.375 billion to build about 55 miles of barriers along the U.S.-Mexico border. But Democrats, Republicans and President Trump have to strike a new budget deal that keeps the government open past Feb. 15.

On Sunday, a White House official said President Trump would consider signing a budget bill that doesn't include all of the $5.7 billion he requested for a border wall, but that he is not ruling out another shutdown if lawmakers can't come up with a compromise.