In Years Before Riot, Congress Kept Knocking Down Plans For A Fence 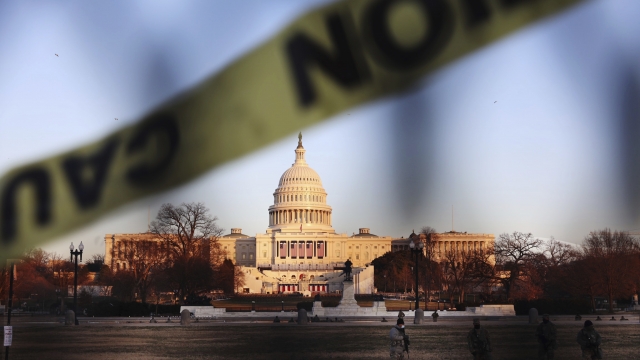 SMS
In Years Before Riot, Congress Kept Knocking Down Plans For A Fence
By Patrick Terpstra
By Patrick Terpstra
January 29, 2021
The idea for a permanent fence around the Capitol has come up after previous security scares, including a 1983 bomb explosion in the Senate.
SHOW TRANSCRIPT

Congressional leaders say it’s too early to commit to wrapping a permanent fence around the U.S. Capitol, which the acting chief of the U.S. Capitol Police has proposed after the Jan. 6 attack.

Both House Speaker Nancy Pelosi and Senate Democratic Leader Chuck Schumer are waiting for a more thorough security review before weighing the contentious question of whether to restrict public access to the Capitol grounds, according to spokespeople from their offices.

Erecting a pedestrian barrier on Capitol Hill is an old idea, one lawmakers have considered and rejected for decades.

Former defense secretary Leon Panetta was a congressman in 1983 when someone planted a bomb in the Senate.

“It was an open Capitol and a woman carried a bomb in her purse,” Panetta said.

It blasted late at night through the Republican cloakroom, empty at the time.

No one was hurt.

Afterward, Panetta led a push for major security upgrades as chairman of a House subcommittee responsible for safety of the legislative branch.

“I remember discussing whether we should put up bulletproof glass,” Panetta said.

The Capitol already had metal detectors.

Panetta said the time had come to build a fence like the one at the White House first ordered by Thomas Jefferson.

Panetta’s idea of tightening access to the Capitol campus proved too unpopular among his colleagues.

“We had to think twice about anything that might interfere with the public’s ability to have access to its own democracy,” Panetta said.

No fence went up.

Lawmakers dramatically scaled up security after 9/11 with more police, closed streets and fewer entry points to the building.

They focused on the threat of an attack from a bomb by plane or truck, not from terrorists on foot.

The Senate’s sergeant at arms at the time tried to get lawmakers on board with a decorative, more welcoming fence.

“When people wanted to come through, they’d have access 24-7,” former sergeant at arms Terrance Gainer said in an interview earlier this month on C-SPAN. “But they’d have to pass through the type of checkpoint you might have at the airport.”

Lawmakers shelved that idea, too.

Anyone was free to stroll the grounds of the “people’s house” until Jan. 6, the day a mob muscled past outnumbered police and bike racks and into the Capitol.

“Razor wire up here is just really sad,” said longtime D.C. resident Elaine McArdle, out for a walk along the barrier.

“It’s not pleasant to think about but at the same time I think it’s very clear we have to do everything necessary to make sure what happened on Jan. 6th never happens again,” Panetta said.

With additional reporting from Zach Cusson.