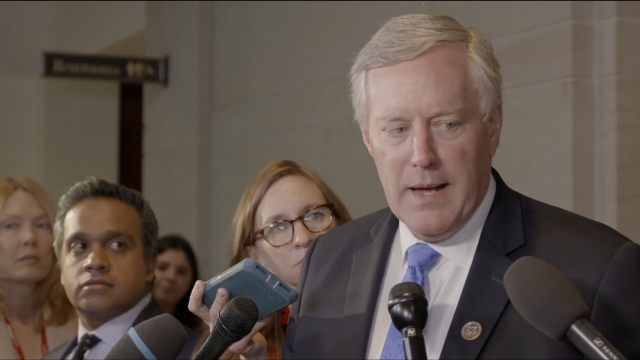 The House voted along party lines to affirm and continue with an impeachment inquiry into Donald Trump. Here's what lawmakers said about the vote.

The House of Representatives voted 232-196 to affirm and continue with its impeachment inquiry into President Donald Trump.

But Democrats stressed that the vote wasn’t a victory, calling it a sad day for America.

"This is a solemn day in the history of our country when the president's misconduct has compelled us to continue to move forward with an impeachment inquiry," House Intelligence Committee Chairman Adam Schiff told reporters.

Responding to GOP critics who say the inquiry thus far has been unfair and illegitimate, Pelosi argued the resolution would make the inquiry more fair and transparent.

"There's nothing that has been fair about this process today's vote further empowers Adam shift to call the shots. It is not a fair process," Meadows told Newsy.

Republican leaders blasted the vote, saying the process has been broken from the beginning and cannot be fixed.

Wyoming Republican Rep. Elizabeth Cheney said the resolution, "gives authority for open hearings, but they cannot go back and fix what is a fundamentally tainted and unfair record."

Only Democrats voted "yes" on the resolution and two Democrats voted against it, which republicans are using as a tag line, saying the vote to reject the rules was a “bipartisan” effort.

"To have a bipartisan vote against the resolution starts to show that this process is starting to unravel as more and more people see the facts and the merits of the case and the process that has gone along with it," Meadows said.

Now democrats say this resolution, which affirms the ongoing inquiry and established guidelines for public hearings in the House Intelligence and Judiciary Committees, will force Republicans to have to defend the merit of President Trump's actions instead of blasting the proceedings. That’s something Meadows says he’s happy to do.

"I can tell you I'm all ready to talk about the merits of this case, because this President hasn't done anything that is impeachable," he said.