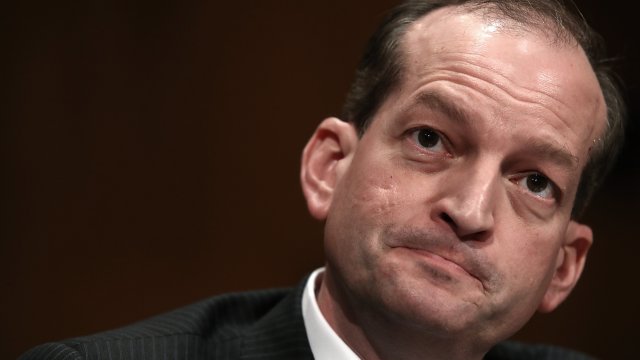 "It is now impossible for anyone to have confidence in Secretary Acosta's ability to lead the Department of Labor. If he refuses to resign, President Trump should fire him," Sen. Chuck Schumer said.

Calls for Labor Secretary Alexander Acosta to step down are getting louder as he faces scrutiny over a secret plea deal he cut with billionaire Jeffrey Epstein in 2008.

Senate Minority Leader Chuck Schumer, House Speaker Nancy Pelosi, Senate Minority Whip Dick Durbin and other Democratic lawmakers have criticized Acosta's involvement with the agreement, which was when he served as U.S. attorney for the Southern District of Florida. No Republicans have demanded Acosta's resignation.

Here's what happened. Epstein was accused of sexually abusing dozens of underage girls in the early 2000s. But the plea deal allowed him to avoid federal charges. He pleaded guilty to two lesser counts in state court and served 13 months in a county jail facility that let him leave six days a week to work out of his office.

A report from the Miami Herald in November 2018 said the deal "essentially shut down an ongoing FBI probe" and granted immunity to other people potentially involved in the case. The report also said that the victims were never aware of the deal Acosta made with Epstein. A federal judge ruled the agreement was illegal, but two weeks ago, the Justice Department said it won't throw it out.

While speaking with reporters at the White House Tuesday, President Donald Trump defended Acosta as his labor secretary, but said his administration will look at his handling of Epstein's case.

"I feel very badly about that whole situation. But we’re going to be looking at that and looking at it very closely," President Trump said.