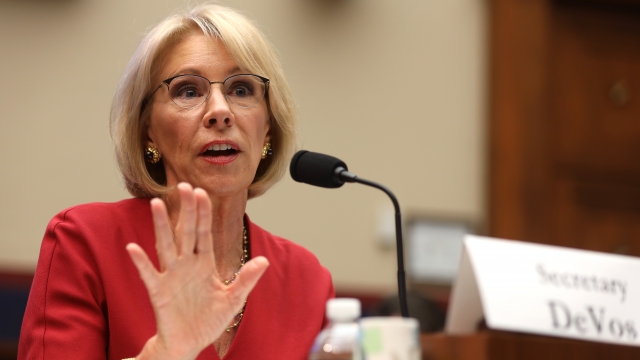 Education Secretary Betsy DeVos is facing intense criticism from House Democrats over her efforts to overhaul a federal program that forgives college loans for students who were defrauded by for-profit institutions.

Their ire was on full display Thursday, when members of the House Education and Labor Committee asked her some withering questions.

DeVos was accused of obstructing loan relief to as many 200,000 students. Among those are thousands who attended Corinthian Colleges, a for-profit chain that collapsed in 2015 amid lawsuits alleging it had deceived students about their post-graduation job prospects.

The issue led to this exchange with California Rep. Josh Harder. He pointed to a constituent who had $40,000 in debt of after attending a Corinthian-affiliated institute that promised an 85% job placement rate. Harder said the actual rate was closer to zero percent.

"You have put roadblock after roadblock in front of these students. Your job is to fight for them. But instead, your actions suggest you would prefer to be the chief lobbyist for the predatory schools that defrauded them," he told DeVos.

Harder accused the education secretary of obstructing a federal court order by failing to stop federal debt collection efforts against many defrauded students. That triggered a spirited response.

He asked: "Are you deliberately violating this federal court order because you are too corrupt to uphold the law? Or because you're too incompetent to do your job?”

And DeVos replied: "Congressman, let me begin by saying I took great personal offense to everything you just said. I come to my job every day on behalf of students. I don't need to sit and listen to what you just spewed out of your mouth."

"If students have been deceived by institutions and suffered financial harm as a result, they should be made whole. But if claims are false or students did not suffer financial harm, then hardworking taxpayers, including those who scraped and saved to faithfully pay their own student loans, should not have to pay somebody else's student loans, too. It's a matter of fairness."