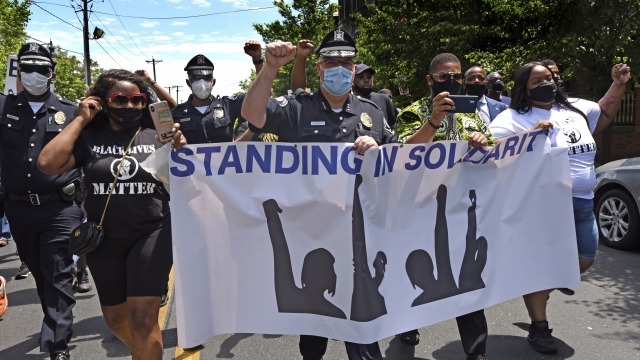 Officers across the country shared messages of unity and support for protesters.

Amid reports of looting and excessive force at protests over the weekend, some law enforcement departments worked to communicate with their communities and even march alongside them.

On Sunday, Minneapolis Police Chief Medaria Arradondo was photographed kneeling at a memorial for George Floyd outside a grocery store. Floyd, a Black man, died last week as a White Minneapolis police officer pressed a knee into his neck while arresting him.

From New York to California, similar photos show law enforcement kneeling in solidarity for Floyd. In Michigan, a county sheriff shared messages of unity with protesters before joining a march.

"The only reason we're here is to make sure that you've got a voice. That's it. Don't think for a second that he (the police officer who killed George Floyd) represents who these cops are from all over the county and around this nation. We go out there to help people, not do that nonsense," Genesee County Sheriff Chris Swanson said.

In North Carolina, a police officer shared her feelings on Floyd's death and her experience in law enforcement with protesters.

"I can't speak for those officers or that officer in Minneapolis. I can only do what I can do and what I can say and how I feel. I'm hurt the same way you hurt, like you hurt, like everybody out here's hurt. We all feel the same pain. Obviously some of our pain is deeper, deeper rooted, just because of the color of our skin. I understand that, I understand your pain," officer Jasmine Nivens with the Charlotte-Mecklenburg Police Department said.

Whether they were kneeling or marching, many officers said they strive to hold themselves and other officers accountable to their communities.