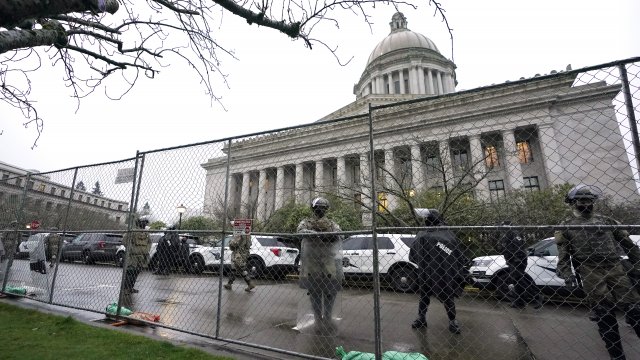 SMS
Law Enforcement Prepare For Violence At State Capitols Nationwide
By Jamal Andress
By Jamal Andress
January 13, 2021
A recently released FBI bulletin warns of plans for armed protests at all 50 state capitols and in Washington in the coming days.
SHOW TRANSCRIPT

Law enforcement around the country is preparing for potential unrest ahead of President Elect-Joe Biden's inauguration like we saw at the U.S. Capitol last week.

A recently released FBI bulletin warns of plans for armed protests at all 50 state capitols and in Washington in the coming days.

SPADAFORE: "We need all available resources here in our community to preserve the safety of all our residents and visitors."

In Lansing, Michigan, where armed Trump supporters breached the capitol building back in April, preparation is underway for another potential threat.

In reaction to the events at the U.S. Capitol last Wednesday and more planned protests ahead, Michigan officials banned all open carrying of weapons in the statehouse.

They haven't, however, banned concealed weapons from entering the building. And despite requests from Lansing's mayor and some local officials, Gov. Gretchen Whitmer hasn't activated the National Guard.

This runs in stark contrast to the U.S. Capitol in D.C., where hundreds of National Guard members are lining the hallways in preparation for President-elect Biden's inauguration.

HOKANSON: "I was on the phone with Pennsylvania, New York, New Jersey and Delaware, and they gladly volunteered the 6,400 that we have on duty today, and we're building that up to 15,000 between now and the inauguration to make sure we meet every requirement from each of those federal agencies, to make sure that they can conduct a peaceful transfer of power of inauguration on the 20th of January."

The National Guard has also been activated in several states, including Minnesota, Washington, Georgia and Ohio.

President Trump has taken no responsibility for the violence at the U.S. Capitol or the potential violence being threatened by his supporters at state houses across the country. Despite that, he did call for calm in the upcoming days leading up to the inauguration in a recent statement.

PRES. TRUMP: "I urge that there must be NO violence, NO lawbreaking and NO vandalism of any kind. That is not what I stand for and it is not what America stands for."