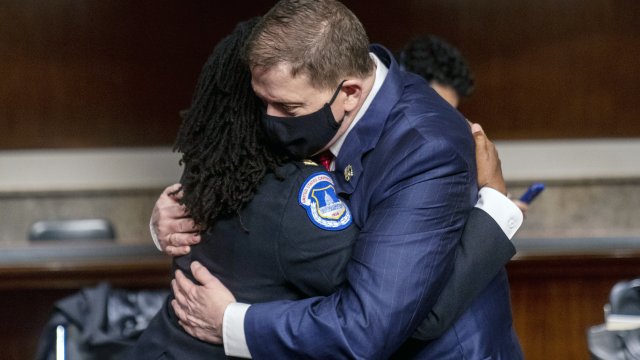 Americans heard from those in charge during the Jan. 6 attack on the Capitol for the first time Tuesday. Top law enforcement officials appeared before a Senate panel and played the blame game, saying there was a major breakdown in communication about warnings, including one from the FBI, in the days leading up to the attack that left five people dead.

"That report made it to our intelligence bureau and ceased moving forward that point. No leadership, including myself at Capitol Police, was made aware of it at the time of the event," said former U.S. Capitol Police Chief Steven Sund.

Sund, as well as other law enforcement officials, told senators the attack was planned.

"I would agree the evidence would indicate a coordinated attack," added former House Sergeant at Arms Paul Irving.

Concerning information was also revealed about the lack of preparedness ahead of the riot. Sund said not all officers were outfitted with riot gear, and Capitol officers were not trained for an infiltration.

There are still many unanswered questions, most notably why it took so long to deploy the National Guard. Contee told senators there was a reluctance that day to send in the Guard. Sund said he had requested help more than four hours before it arrived. Irving says he never got a call for approval during the insurrection.

Senate Rules Committee Chairwoman Amy Klobuchar says there will be another hearing next week to clarify this issue with the Pentagon.