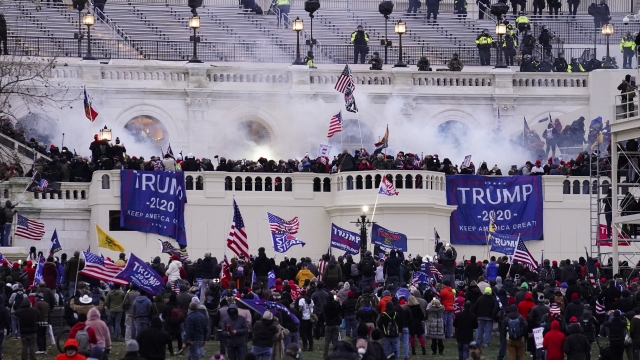 Law enforcement has made dozens of arrests, including men pictured here: One shown taking House Speaker Nancy Pelosi's podium. The other who was photographed behind Speaker Pelosi's desk Wednesday.

Two other men were arrested, both seen in photos carrying plastic restraints inside the Capitol building.

This man, Eric Munchel, was arrested in Tennessee.

He was pictured wearing all-black tactical gear with a phone strapped to his chest.

And Larry Rendell Brock was arrested in Texas.

He's a retired Air Force officer. His ex-wife called the FBI to report him.

An Associated Press investigation found the majority of people arrested in connection with the riot have are longtime supporters of President Trump. They include GOP officials, GOP donors, White supremacists and Q-Anon conspiracy theorists.