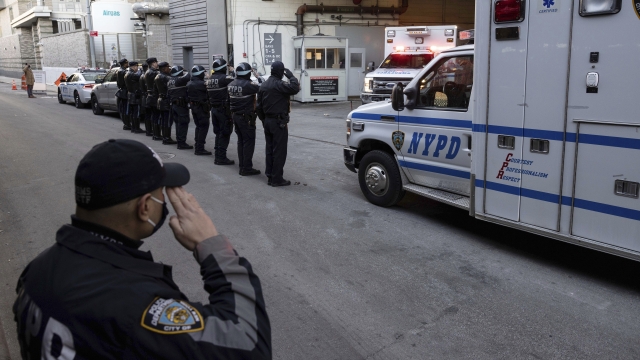 Last year was the deadliest ever for U.S. law enforcement, with COVID accounting for 65% of total fatalities.

As the first month of 2022 comes to a close, many police officers feel their job is more dangerous than ever.

"No more excuses. Everybody take an active role and get intentional about doing whatever you can do to fight gun violence in our city. Period," Houston Police Department Chief Troy Finner said.

It's been a historically violent week in Houston.

Harris County Corporal Charles Galloway was killed during a routine traffic stop Sunday. The suspect fled but was eventually captured across the border in Mexico and brought back to Houston to stand trial.

Then just four days later, three HPD officers were shot during a car chase. All three officers survived the shooting.

“It's been a tough week for law enforcement in our city and the two law enforcement officers that we lost," Finner said. "We continue to pray for them and their family as we plan for their funerals. It is tough."

Looking at all the ways officers died on duty in 2021, the National Law Enforcement Memorial Fund says last year was the deadliest for U.S. law enforcement in history with 458 total fatalities. That’s a 55% increase compared to last year and 146 more deaths than the previous record year.

"I think that number surprised everybody. I mean, quite frankly, that's a staggering number," said Troy Anderson.

Anderson is the executive director of safety and wellness for the National Law Enforcement Memorial Fund and a retired police sergeant.

"There are no hostages in policing," Anderson said. "People come into police work because they want to do better. They want to leave it better than they found it. They believe in the core values of what this is. But they didn't sign up to die. Nobody signed up to die."

While COVID was far and away the leading killer of law enforcement officers in 2021 — accounting for 65% of total fatalities — gun deaths also rose last year. There were 62 police officers were killed with a gun — a 38% rise compared to 2020.

"I look at the 19 killed in ambush style killings," Anderson said. "That is so high. That number has gone up so far."

The rise in firearm-related fatalities has corresponded with a significant rise in overall violence across the country in 2021, though there’s not enough data available to say the two are related.

Perhaps most disturbingly though, 73 officers were killed intentionally while on duty in 2021 — the highest total since the 9/11 terrorist attacks.

And those attacks have continued into the new year. In New York, two young officers were shot and killed this week responding to a domestic violence call.

"New Yorkers feel as if a sea of violence is engulfing our city, but as your mayor, I promise you, I will not let this happen," Mayor Eric Adams, (D) New York City, said. "We will not surrender our city to the violent few."

"It’s not just us, it’s all of us," Milwaukee Police Department Chief Jeffrey Norman said. "We all gotta be sick and tired of this."

Also in the Midwest, one St. Louis police officer is in critical condition after a fire fight with a homicide suspect.

According to the Officers Down Memorial Page, 25 officers have been killed in the first month of 2022 so far, with COVID accounting for 14 of those deaths and gunfire next - killing four officers.

In addition to the threat of being killed, officers also face serious non-lethal attacks.

The FBI says in 2020 some 56,000 officers were assaulted. That includes being punched, kicked and stabbed as well as being shot and is about 4,000 more than the previous year.