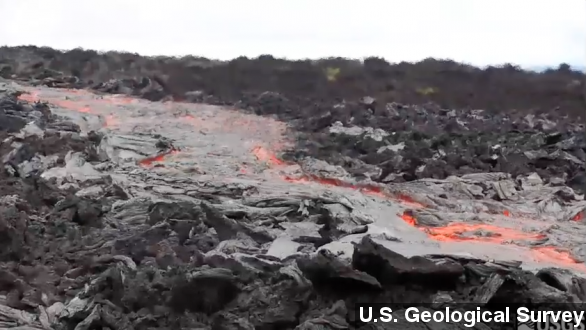 By Lauren Zima
September 5, 2014
Lava from the Kilauea volcano on the Big Island is less than a mile from a group of homes, but information has both alarmed and confused residents.
SHOW TRANSCRIPT

Areas in Hawaii are facing a serious but confusing threat as lava flows near homes.

KHNL: "The lava is now less than one mile away from the Kaohe Homesteads. Some livestock that could be in harm's way is being moved as a precaution. ... Hawaii Civil County Defense went door-to-door today alerting residents."

KGMB reports, the threat level has been raised from a watch to a warning.

But while an emergency has been declared in the area, authorities are also saying the lava isn't something to panic about.

"It's a very slow-moving surface flow. It's progressed just under 100 yards since yesterday, to give you an idea of how slow it is moving."

Residents have attended community meetings at area schools to get the latest information. From what we saw on local outlets, it was obvious that latest information had caused some confusion. (Video via Big Island Video News)

RESIDENT: "I understand your role is not to project and plan too far ahead, but can you plan ahead here?"

KGMB noted an evacuation has been talked about, but it's "unclear when that might happen."

Kenoi said his emergency proclamation was to ensure residents would have time for a safe evacuation if the lava flow continues. If it does continue, the lava could possibly reach homes in five days to a week. The lava has been flowing from this vent since late June. Kilauea has continuously erupted since 1983.