Wash And Learn: Laundromats And Libraries Are Fighting 'Book Deserts' 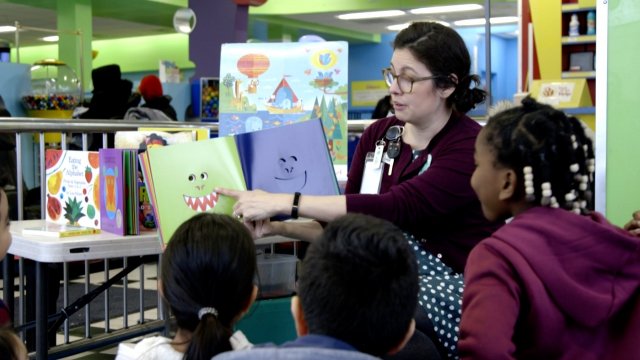 SMS
Wash And Learn: Laundromats And Libraries Are Fighting 'Book Deserts'
By Jamal Andress
By Jamal Andress
January 25, 2019
In the Bronx, Detroit, Chicago and other cities, libraries are partnering with laundromats to provide books to low-income and low-literacy areas.
SHOW TRANSCRIPT

Laundry is a necessary chore — one that’s especially boring for kids who tag along to a laundromat every week. But now, a bi-weekly pop-up reading program from the Chicago Public Library is putting an educational spin on family trips to the laundromat. So, why combine books and laundromats? Well, turns out, there are several reasons.

"We really were thinking, where can we meet the community where they're at? Like, where's the need?" said Becca Ruidl from the Chicago Public Library.

"For one, people are stuck there. And they're stuck there for a while. Another aspect is that people often return to the same laundromat every week. So it's a really unique way of reaching families over the long term in a sustained way," said Adam Echelman, Executive Director of Libraries Without Borders.

"Oftentimes, these laundromat locations are also sort of in a book desert type area and if you look at it, statistically, the families that are patronizing the laundromats there's a very low ownership rate for books, particularly kids books," said Brian Wallace from the Laundry Cares Foundation.

“Book deserts” are often in low-income areas, where access to books is limited and literacy rates are below average.

In Chicago, 61 percent of low-income families do not own a single children’s book. Literacy advocates say that may be linked to why nearly 40 percent of public school students do not meet or exceed reading standards. And if those kids continue to lag behind in reading, there’s a greater chance they’ll end up in jail or in poverty. But it’s not just Chicago. A 2001 study of low-income Philadelphia neighborhoods found for every 300 children, there’s only one children’s book. Meanwhile, in middle and upper-class neighborhoods, the study found that every single child had an average of 13 books.

"So since 2015, we've been creating this whole national strategy on how to turn every single laundromat into a branch of the public library," said Echelman.

Echelman is the Executive Director of Libraries Without Borders, which partners with local laundromats for the “Wash and Learn” initiative. He says the laundry literacy program is already in seven states and will expand to at least two more in 2019. Their ultimate goal is to implement the program in all 30,000 plus laundromats across America.

And based on Ruidl’s assessment of the program’s success in Chicago, achieving that goal doesn’t seem terribly far off.