US And China Implement Another Round Of Tariffs On Each Other 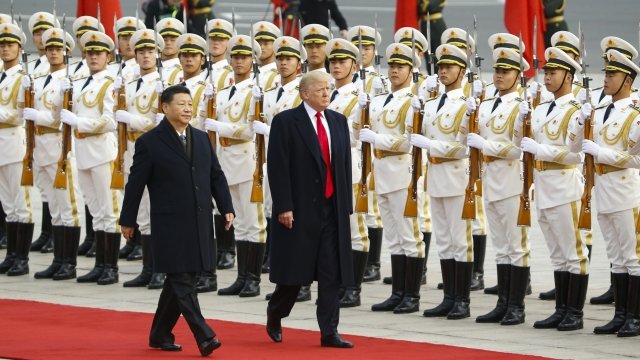 SMS
US And China Implement Another Round Of Tariffs On Each Other
By Katherine Biek
By Katherine Biek
August 23, 2018
The 25 percent tariffs come as officials from both sides met in Washington for more trade negotiations.
SHOW TRANSCRIPT

The U.S. and China imposed even more tariffs on each other Thursday.

Each side implemented a 25 percent tax on another $16 billion of the other's goods — including motorcycles, chemicals, plastics and diesel fuel.

This latest round in the U.S. and China's tit-for-tat trade battle comes as officials met in Washington for more trade negotiations.

Previous rounds of talks between the two countries didn't really make much progress. And even President Donald Trump told Reuters he didn't "anticipate much" from this latest round of trade talks.

Thursday's tariffs are on top of the taxes both the U.S. and China already imposed on $34 billion of each other's goods back in July.

And even more could be on the way. President Donald Trump already proposed slapping tariffs on an additional $200 billion of Chinese goods. Beijing responded with a list of $60 billion of American goods it said it would tax if those U.S. tariffs went into place.