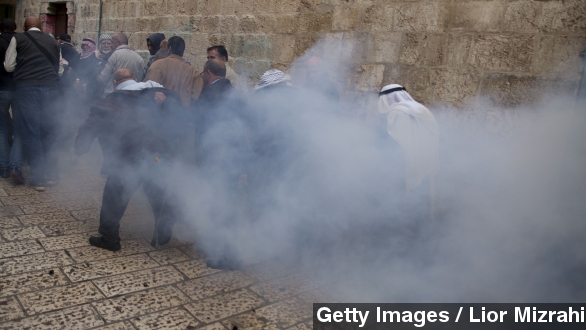 The latest violent incident in an already tense Jerusalem left at least one person dead and a dozen others injured Wednesday.

A Palestinian driver rammed into a crowd of people near a train station before getting out of his vehicle and trying to attack other bystanders. Police ultimately shot him to death. (Video via ITV)

This attack comes less than a month after a similar attack in the same area killed a 3-month-old baby and a woman from Ecuador. (Video via Euronews)

After this latest attack, Haaretz quoted a Hamas official as saying: "'We praise this heroic operation. ... We call for more such ... operations.'"

It's been a tense couple weeks in the Israeli capital, with violence erupting after a Palestinian man attempted to assassinate a right-wing American-Israeli activist campaigning for Jews to be allowed to worship at the Temple Mount. The would-be assassin was later killed by police in east Jerusalem.

After being closed briefly by the Israeli government, access to the holy site has since been restricted, and was closed again Wednesday — a move that prompted clashes between police and protesters. (Video via RT)

In fact, Jerusalem's mayor called Wednesday's attack "part of Arab incitement," according to The Jerusalem Post, and there are fears the violence could escalate.

As The New York Times points out, closure of the mosque — one of Islam's holiest locations — has even strained relations with ally Jordan, which is responsible for maintaining the site.

The man killed in Wednesday's attack was a border police officer in his late 30s. Two others were reportedly in critical condition.