Latest Ebola Outbreak In Congo Is The Second-Largest In History 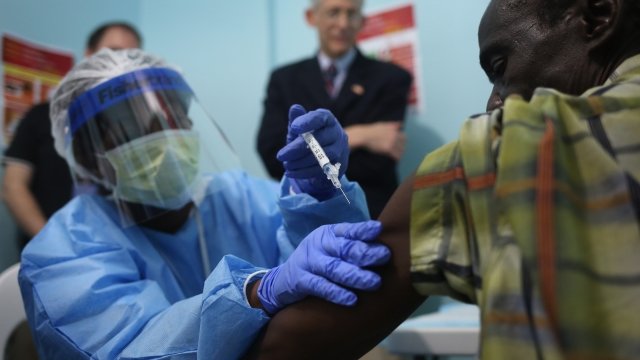 SMS
Latest Ebola Outbreak In Congo Is The Second-Largest In History
By Katherine Biek
By Katherine Biek
November 30, 2018
Health officials say at least 426 confirmed and probable cases of the virus have been reported.
SHOW TRANSCRIPT

A World Health Organization official says an Ebola outbreak in the eastern part of the Democratic Republic of Congo is now the second-largest in history.

At least 426 confirmed and probable cases of the virus have been reported since the outbreak was declared back in August. More than 240 of those people have died.

The largest outbreak of the virus on record occurred in West Africa and killed more than 11,300 people between 2014 and 2016.

This most recent epidemic in Congo is the country's 10th outbreak. It was declared just over one week after the WHO cleared the area of a previous outbreak.

More than 37,000 people in the outbreak zone have received vaccinations, and Congo's also started a multi-drug clinical trial to try to determine which Ebola treatment is most effective and safe.

Health officials predict it'll be at least six months before this latest outbreak in Congo is contained.