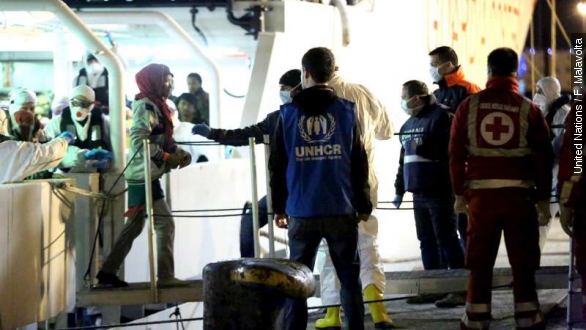 The latest migrant tragedy has hit the Mediterranean.

"At least 650 migrants are feared to have drowned after a boat capsized in the Mediterranean," the BBC anchor said.

That's a headline that's becoming increasingly familiar as more migrants try to make the journey across the Mediterranean from Northern Africa.

The Italian coast guard reports it's saved close to 30 people and recovered as many bodies.

The International Organization for Migration estimates more than 20,000 immigrants have reached the Italian coast since the start of 2015. (Video via United Nations)

Four hundred migrants are presumed dead after another capsize last week, and when you add to that a capsize in February that killed some 300 more, that brings the total for 2015 to at least 700, excluding Sunday's victims. (Video via United Nations, RAI)

The IOM is calling for broader support from the European Union to prevent further deaths.

That's one position in an ongoing debate in Europe, over what to do about the thousands of migrants crossing the Mediterranean. (Video via United Nations)

On the IOM's side: the pope, who last year called for solidarity with the migrants. (Video via France 24)

"We can not allow the Mediterranean to become a vast graveyard," Pope Francis told the European Parliament.

Activists argue the human toll the EU's current policy of deterrence is taking is worse than allowing migrants into the continent. (Video via United Nations)

That policy has cut back on rescue efforts and has instead aimed to intercept migrant boats and return them to Africa. (Video via European Council)

On the other side, opponents argue rescue efforts only encourage increased migration. (Video via Deutsche Welle)

Most of the migrant ships come from Libya, and observers say the regional instability there is a driving factor behind the migrants, whose numbers are only expected to increase as summer approaches. (Video via CCTV)

This video includes an image from Getty Images and music by Chris Zabriskie / CC by 4.0.