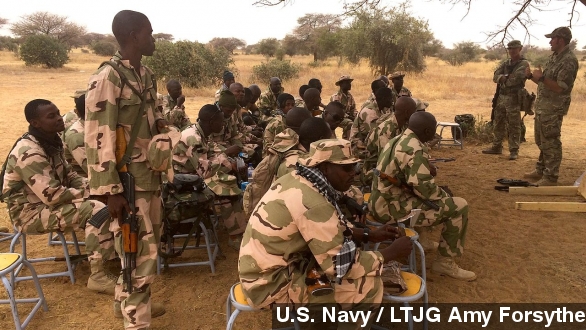 Another Nigerian village has suffered a devastating attack, and the nation's infamous terrorist group Boko Haram is likely to blame.

Gunmen stormed the village of Gumsuri on Sunday, burning buildings, killing an estimated 33 people and kidnapping at least 185. The attack took place in a remote corner of northern Nigeria so isolated that the news didn't make headlines until Thursday.

Officials are blaming the murders and kidnappings on Boko Haram, the Islamist terrorist group that's killed thousands of people in the region this year alone. The group's most notorious attack resulted in the kidnapping of more than 200 schoolgirls from a school in Chibok back in April.

Gumsuri, which is located in the same state as Chibok, has been targeted by the group before. A vigilante group has defended the village from earlier attacks, but survivors say the vigilantes were overwhelmed Sunday.

The attack raises further questions about the Nigerian military's ability to combat Boko Haram. Despite some recent gains against the group, Nigeria's army is widely considered to be less equipped than the militants it's fighting.

The army's also suffering from a motivational crisis: A military court-martial that began in October has led to 54 soldiers being sentenced to death by firing squad for mutiny — specifically, refusing to help retake villages captured by Boko Haram.

The Telegraph notes this comes on the heels of a September conviction that sentenced 12 more soldiers to death for firing on their commander rather than fighting the terrorist group.

And there've been multiple reports of Nigerian soldiers fleeing the battlefield en masse and crossing the border into neighboring Cameroon.

Earlier this year, Nigerian President Goodluck Jonathan asked lawmakers to approve a $1 billion foreign loan to strengthen the country's military. But as a former ambassador to Nigeria told Voice of America, it's not clear the civilian government actually wants a strong military.

"How do you reduce the coup-making potential of the military? Well, what you do is starve it for resources. So I think that accounts, in part at least, for the transformation of the Nigerian military from being, by far, the best in Africa to one which now ... regularly runs from firefights with Boko Haram."

The terrorist group still holds about two dozen settlements in northeastern Nigeria, though it's been less successful in Cameroon: On Wednesday, more than 100 militants were killed in clashes with the country's military.