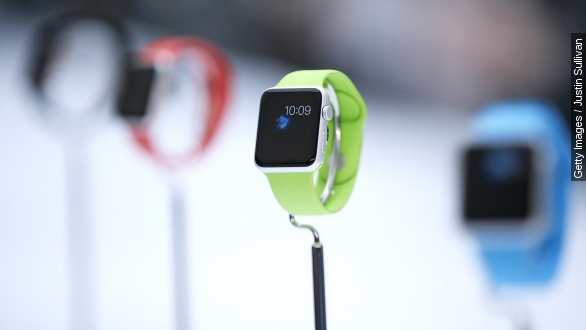 SMS
Latest Apple Watch Drama Involves Faulty Part, Tattoos
By Cliff Judy
By Cliff Judy
April 30, 2015
A part supplier for the Apple Watch could be partially to blame for the shortage, and some users with tattoos have noticed problems with the device.
SHOW TRANSCRIPT

Remember the huge lines for iPhone 6 and 6 Plus? Remember the employees opening Apple Store doors and welcoming the first buyers in with embraces and celebrations over the new gadget?

Do you remember seeing those lines for the Apple Watch? Probably not. That's because Apple's typical tightly controlled rollout was paired with a huge shortage compared to demand. (Video via Apple)

The Wall Street Journal reports a key part from one of two suppliers broke down too easily, and a source told the outlet Apple decided to scrap some completed watches instead of releasing a weaker product to market.

The part is the taptic engine, which uses a motor to give users a tap on the wrist for notifications instead of buzzing or ringing. To be fair, The Journal noted it isn't clear how much the defective parts contributed to the overall Watch shortage.

The next glitch affecting the watch's rollout? Tattoos.

"So you see there, the lock's there no more," iDeviceHelp's demonstrator said. "So if I switch it off and switch it back on, the lock should not come back on. But the lock does come back on."

Users, especially those with full-sleeve tattoos, began noticing the watch regularly locked on them — an annoying problem to say the least for users who wanted to use Apple's highly touted health and fitness features. (Video via YouTube / Michael Lovell)

The problem apparently comes from the watch's infrared sensor used to measure your heart rate. Tattoo ink, especially dark or red ink, can block or confuse the sensor, making it think the watch is no longer being worn. (Video via Apple)

With the watches shipping late last week, news on the latest drama for the most anticipated product in wearable tech was inevitable. Every product has a glitch, and perhaps no company is under a brighter spotlight than Apple.

Remember the iPhone 4's antenna problems that caused phones to lose signal and calls to drop when you held it the wrong way? (Video via iGear360)

Let's hope CEO Tim Cook and company can work through the latest glitches and churn out enough of the watches to appease the rarely satisfied masses.