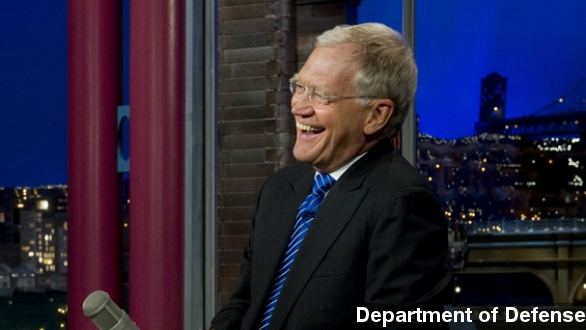 After 32 years on the late night scene, Late Show host David Letterman will hang up the microphone and retire in 2015.

CNN confirmed that during the taping of Thursday’s show, Letterman told the audience “I just want to reiterate my thanks for the support from the network ... everybody at home, thank you very much.” And he ended it in typical Letterman deadpan style.

“What this means now is that Paul and I can be married.” (Via CBS / 'The Late Show with David Letterman')

Who could forget the kooky interviews, the Top Ten lists or the everyday objects thrown off buildings?

Soon after the news broke, many praised Letterman’s career. In a statement, CBS CEO Les Moonves said the host’s  “greatness will always be remembered here, and he will certainly sit among the pantheon of this business.”

And ABC late night host Jimmy Kimmel tweeted that Letterman “is the best there is and ever was.”

Of course, with The Late Show’s seat being vacated, the Internet was abuzz with speculation about who would replace him.

And Forbes says “It’s possible we could soon see a woman in the mainstream late-night fray… [but] CBS tends to be an old skewing network though so they might go with a more conservative pick.”

Whoever it is may have a tall task facing them as ratings for Letterman have lagged behind Jimmy Fallon’s Tonight Show since Fallon’s debut in February.