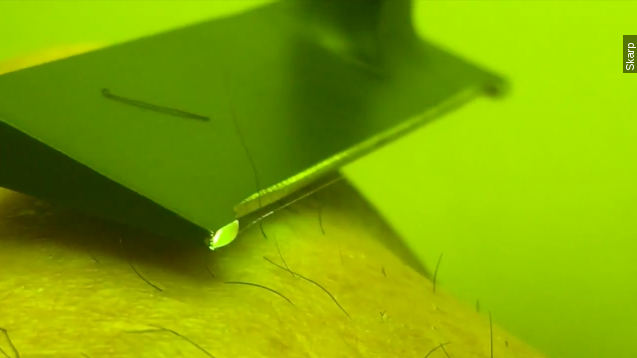 Skarp, which is developing a laser razor, launched a campaign on the laissez-faire Indiegogo after Kickstarter suspended its crowdfunding efforts.

"We wanted a laser that could cut all hair. Many prototypes were built, and after years of experimentation, we have found exactly what we're looking for," said Morgan Gustavsson.

Less than a month after its inception, Skarp, a razor that claims to shave your body using laser technology, has been kicked off of Kickstarter.

According to The Register, which cites an email from Kickstarter, the crowdfunding site suspended Skarp's campaign because it broke the rules.

Typically, canceled Kickstarter campaigns don't make headlines. But Skarp had raised $4 million dollars before Kickstarter suspended its funding. Also it's a doggone laser razor, so it's practically a lightsaber.

Skarp didn't get a dime, but it hasn't given up. Instead it jumped ship to another popular crowdfunding site when its Kickstarter campaign was suspended. (Video via Indiegogo)

Tuesday, Skarp announced it will now raise funds to make its laser razor on Indiegogo. Of note, this crowdfunding site does not require a prototype to launch a campaign. In 11 hours, it's already raised more than $100,000.