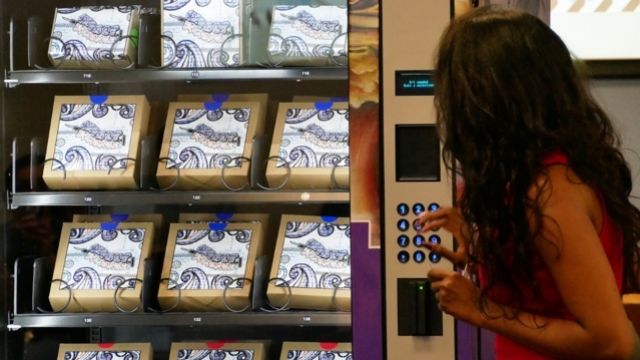 Las Vegas will be the first place in the U.S. to have this kind of service for drug users.

Las Vegas will be the first place in the U.S. with vending machines that dispense clean needles for drug users.

Health officials say free machines will be installed in three locations in the city by the end of May.

They look just like your standard vending machine, but they'll be stocked with kits that have new syringes, a rubber tourniquet, a disposal container, alcohol swabs and bandages.

All the syringe kits will be the same. The machines will also offer kits for cleaning wounds and for safe sex.

To use the machines, people must register for a swipe card and an identification number. No personal information is needed to get a card, but each user is limited to two kits a week.

"Having access to clean syringes is a harm-reduction approach that's going to allow people to protect themselves against getting communicable diseases, such as HIV and hepatitis C," Trac-B Exchange program manager Chelsi Cheatom told the Las Vegas Review-Journal.

According to the Centers for Disease Control and Prevention, in 2015, 1 in 10 AIDS diagnoses were attributed to injecting drugs.

Although the Vegas vending machines will be the first in the nation to dispense syringes, places like Australia, Germany and Italy have had similar machines for years.