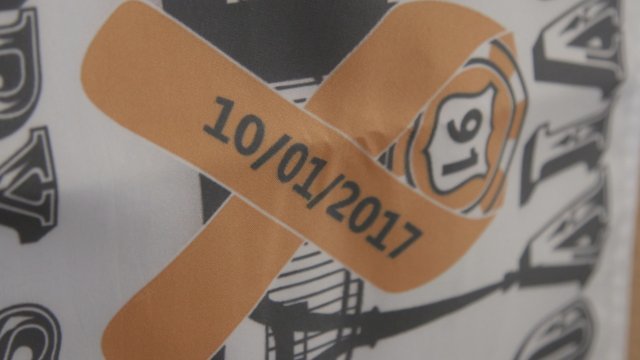 By Alexandra Miller
October 1, 2018
One year after the Las Vegas shooting, hundreds of survivors are still struggling with what they witnessed that night and how to move forward.
SHOW TRANSCRIPT

"We were all listening and dancing along and I remember hearing 'pop pop pop pop,'" said 20-year-old Cody Jones.

Just 15 minutes after Shannon Caffey and his wife got to the concert, shots rang out.

"It was sad," Caffey said. "I didn’t think I'd ever see something like that."

He pulled out his phone and took a video for his friends and family, just in case he didn't make it.

"I thought we were going to die for sure," he added. "It was chaos."

Caffey hid for what seemed like a while before he and his wife made a run for it. By the time he had a minute to look down, he noticed his leg was bleeding. He had a deep shrapnel wound.

Cody Jones was on a "staycation" with her mom, an annual trip to the Route 91 Harvest Festival. As the festival wrapped, they moved toward the front of the stage to see country star Jason Aldean sing his final songs. As the shooting began, then-19-year-old Jones thought someone had brought in poppers.

She and her mom dove onto the ground, her mom placing her body on top of Jones'.

"I really didn't know if i was going to live," she says. "If that person moved in a different way, that would have been a bullet in my body."

Both she and her mother survived unharmed.

Christine Caria didn't even plan to be at the concert. She wasn't a country music fan. She'd only recently moved to Vegas. But an old friend needed her help working a booth for her business. She certainly didn't expect to click with the people.

"It was a very loving experience all three days," she said.

That's why when Christine heard popping, she thought it could only be fireworks. She still doesn't have a fluid memory of what happened.

"I was trampled, but it probably saved my life because someone who trampled me was hit," she says.

She wound up, like Shannon and Cody, hiding near the venue unable to fully escape. Caria had an asthma attack that night, but it would take weeks and months to know the full extent of her injuries: a torn ligament, crushed joints in her lower back, and eventually a head injury noticed after a seizure. Caria still suffers physically and emotionally.

"PTSD is real. I have had flashbacks that are so strong that I've crashed my car," she says.

But while each is struggling in their own way, they're also channeling their pain to help others. Caria is a member of Route 91 Strong, where she helps bring resources to help survivors stay on their feet. Caffey started an online support group for survivors to connect across the country. Jones started her own nonprofit to help students like her. After the shooting, Jones' grades slipped and she lost her scholarship, but she soon realized she wasn't the only one suffering. Her classmate had been at the shooting, too.

"One day we were in the library, and I looked over his computer screen and he was looking up symptoms of PTSD. At the time I didn't want to admit I was having PTSD as well," she said.

Now, she's helping to raise money for students in need of scholarship funds. The pain for all is still very real. But 365 days later, survivors who were once strangers have formed an inexplicable bond. And they're helping each other make it from one day to the next.