Trump's Economic Adviser Said The Deficit Is 'Coming Down' — It Isn't 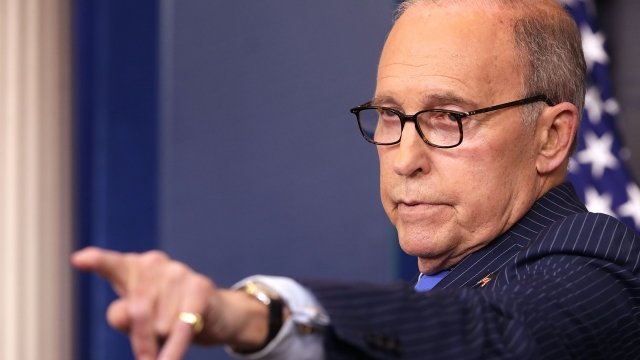 SMS
Trump's Economic Adviser Said The Deficit Is 'Coming Down' — It Isn't
By James Packard
By James Packard
July 9, 2018
Larry Kudlow told Fox Business "growth solves a lot of problems," but made a wildly inaccurate claim in the process.
SHOW TRANSCRIPT

"As the economy gears up, more people working, better jobs and careers, those revenues come rolling in," White House economic adviser Larry Kudlow said on Fox Business. "And the deficit, which is one of the other criticisms, is coming down. And it's coming down rapidly."

Read that again. Did that catch your attention, too?

Kudlow said the deficit is "coming down rapidly."

The Congressional Budget Office, which puts together an independent assessment of the nation's finances, says this year's deficit is on track to be larger than last year's, which was larger than the year before. And its predictions for years to come fit that trend: higher and higher deficits through 2022.

What's more, the CBO says it had to up its estimate for future deficits in large part because of reduced revenues from the president's championed tax break bill.

Kudlow later said he should've talked about future deficits coming down, but again, that doesn't match up with the CBO's projections.